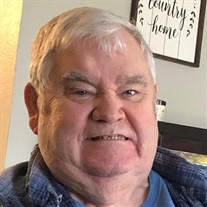 William Allen Wheat Sr. of Ironton, Missouri passed away May 13, 2021 in St. Louis, Missouri at the age of 78 years. He was born March 13, 1943 in St. Louis, Missouri the son of the late Erman and Viola (Cobb) Wheat. On April 26, 1997 he was united in marriage to Sandra Lee Prather who survives. William is also survived by his five children: William Wheat, Jr. of Imperial, Missouri; Bethany Herrera (Rea) of Wildwood, Missouri; Heather Wheat of Higginsville, Missouri; Penny Rodenhouse (Matthew) of Pontoon Beach, Illinois; and Ruth Ann “Ruthie” Davenport (Phil) of St. Louis, Missouri; his brother, Jimmy Wheat of Ironton, Missouri; Paul Wheat of Missouri; fourteen grandchildren and one great- grandson; as well as a host of nieces, nephews, other relatives, and friends. In addition to his parents, Bill was preceded in death by his brother, John Wheat; half-brother, Tommy Wheat; and his sister, Judy Chilton. Bill was a 1961 graduate of Annapolis High School. He earned a Bachelor of Arts in Theology from Central Bible College in Springfield, Missouri. He worked as a minister in the Assembly of God Church. Bill served our country in the United States Air Force. He was a member of the Arcadia Valley Assembly of God Church in Ironton, Missouri. Bill loved fishing, hunting, watching television and he was the guardian of the remote.

The family of William Allen Wheat Sr created this Life Tributes page to make it easy to share your memories.

William Allen Wheat Sr. of Ironton, Missouri passed away May...

Send flowers to the Wheat family.