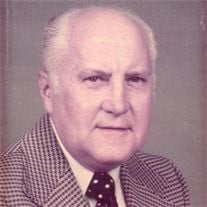 William Louis Sellers, age 97 of Ironton, Missouri went to be with the Lord on Sunday, June 17, 2012. Louis, as he was fondly known, was born in Dillard, MO to Albert and Myrtle Sellers on June 10, 1915. He married Virginia Lee Barrett in St. Charles, MO on August 21, 1937. He and his beloved Dee Dee, celebrated their 70th wedding anniversary in 2008. He was preceded in death by his wife Virginia, infant son, his parents, his brothers; Kenneth and Junior, and his sisters, Wilma, Helen and Geneva. He is survived by his children; Vivian Kreitner (Ken) Bastrop, TX and son Tom Sellers (Rosalie) of Farmington, MO, 5 grandchildren; Cassidy Meyer (Troy) of Fort Worth, TC, Candace Kretiner of Bastrop, TX, Courtney Helford (Keith) of Red Rock, TX, Jason Sellers and Erin Sellers of Farmington, MO and eight great-grandchildren; Victoria Kreitner, Brittany, Bridgett, and Brooke Helford, Mitchell and Madilynn Meyer, Joseph Sellers and Isaac Carpenter. He is also survived by numerous nieces and nephews. He has on surviving sister; Marie Wolffe of St. Louis. Graduating from Ironton High School, Louis immediately went to work for Kroger Grocery Store, to help support his mom and siblings after the death of his father. He was drafted into the United States Army in 1944 and was a decorated veteran of World War II, serving as Sergeant. Briefly stationed in France, he finished his service in Idaho as a prison guard for captured German soldiers. Upon return from the service, he rejoined his position at Kroger. Louie went on to become manager of Kroger at the age of 21 and worked 29 years for the company. Louie loved talking grocery prices and perusing the isles of new stores. A longtime member of the Arcadia Valley United Methodist Church in Ironton, he enjoyed many Methodist Men's dinners and countless service projects. He was a 50 year member of the Mason's. In his retirement he could often be found riding his bike with friends around Shepherd Mountain, working in the yard, tinkering in the basement with his son Tom or chatting over coffee at Mimosa's. Watching the St. Louis Cardinals baseball games was his favorite pastime. Louie also enjoyed traveling with his wife to visit his children and grandchildren. He will be remembered for his strong work ethic, generosity, and sense of humor. He will be missed and cherished. Special appreciation is extended to the staff at Presbyterian Manor for caring for Louie over the past several years.

William Louis Sellers, age 97 of Ironton, Missouri went to be with the Lord on Sunday, June 17, 2012. Louis, as he was fondly known, was born in Dillard, MO to Albert and Myrtle Sellers on June 10, 1915. He married Virginia Lee Barrett in St.... View Obituary & Service Information

The family of Mr. William Louis Sellers created this Life Tributes page to make it easy to share your memories.

William Louis Sellers, age 97 of Ironton, Missouri went to be...

Send flowers to the Sellers family.