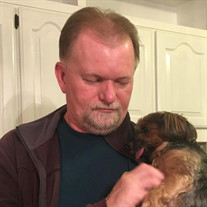 William Herbert Gray known to most as “Bill”, passed away January 30, 2021 at his residence at the age of 55 years. He was born October 17, 1965 in St. Louis, Missouri the son of William and Diana (Jett) Gray. Bill was a 1985 graduate of West County High School. He was also a graduate of Lead Belt Area Vocational Technical School in 1985. He proudly served his country in the United States Navy for seven years before receiving an honorable discharge. While in the Navy he graduated from Machinist Mate A School, Engineering Training School Ship, and Pressure and Temperature Calibration. In 1998 he graduated from Unitec Career Center Welding School. Bill worked for the Missouri Department of Corrections for fifteen years and was currently employed by Union Pacific Railroad for the past eighteen years. He was organized and was an exceptional leader. Bill served in supervisory roles for his employers. On July 27, 1991 he was united in marriage to Tammy Annette Inman who survives and resides in Ironton, Missouri. Bill is also survived by his mother, Diana Gray of Farmington, Missouri, two sisters: Bridgett Joplin and husband Mike of Park Hills, Missouri, and Denise Hedrick and husband Mike also of Park Hills, Missouri, and his fur baby Mackie. Bill’s extended family consists of six sisters-in-law: Jeanette Rennie (Roy), Brenda Barton (Dan Eaves), Mary Ann Blankenship (Greg Lawrence), Pam Edwards (Jim), Jennifer Wagnon (Jerry), and Suzanne Blevins (Adrian) and four brothers-in-law: Jackie Inman, Melvin Inman (Dee), Rick Inman (Amanda), and Larry Inman (Gale). Numerous nieces and nephews, other family members and many, many friends are left to mourn Bill’s passing. Bill was preceded in death by his father, William Gray; his father and mother-in-law, Jack and Elsie Inman; brothers-in-law, David Blankenship and Guy Barton; and sisters-in-law, Beth Inman and Missy Inman, and his aunt and uncle, Bill and Sue Oliphant. Bill was a member of the Arcadia Valley Elks Lodge. He enjoyed spending time with family and friends riding side by sides, playing corn hole, going to shooting matches, and being outdoors. He especially loved to bar-b-que and was the captain of the Bill Frog Bar-b-que team. Most of all he just enjoyed life with family and his many friends. He will be missed. Due to COVID- 19, all family members and guests are required to wear a mask or facial covering while visiting our facility. Social distancing is also expected to keep family members and staff safe. Seating capacity has been reduced to accommodate social distancing. Thank you for your cooperation and understanding.

The family of William Herbert Gray, Jr. created this Life Tributes page to make it easy to share your memories.

William Herbert Gray known to most as “Bill”, passed away January...

Send flowers to the Gray family.