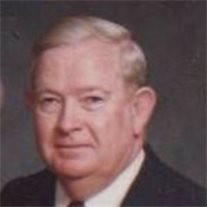 Dr. William Franklin Bryson of Fredericktown, MO passed away February 24, 2008 at the age of 79 years, 5 months, and 24 days. He was born August 30, 1928 in St. Louis, MO to Delmar and Minnie (Wood) Bryson. On September 27, 1953 he was united in marriage to Jean Elinor Sapp who survives. To this union three children were born; Allison Bryson (companion Gary Hoffman) of Farmington, MO, Tracy (Ron) Percy of St. Charles, MO and Mark Bryson of Kimberling City, MO. Also surviving are two grandchildren, Jeremy and Chris Percy of St. Charles, MO, his brother, Robert (Lucy) Bryson of Cherokee Village, AR and his sister, Dee Dee (Gerald) Rencehausen of North Olmsted, OH as well as a host of nieces, nephews, other relatives and friends. Dr. Bryson graduated from Ironton High School in 1946. He graduated from the University of Missouri – Columbia in 1953 with a B.S. in Agriculture and a Doctorate of Veterinary Medicine. He was a member of Alpha Gamma Sigma fraternity. Following graduation he served in the United States Army Veterinary Corp in Fort Riley, Kansas. In 1955 he moved to Fredericktown with his wife Jean and opened the Fredericktown Animal Hospital. He was very active in his community, serving on the Fredericktown Hospital Board from 1964 until 1972 serving as both Vice-Chairman and Chairman. He served on the New Era Bank Board from 1967 until 2000, serving in the office of Secretary for many years. He served as President of the Missouri Veterinary Association and was Missouri Veterinarian of the Year in 1977. He is a founding member of the Veterinary Museum in Jefferson City. He served on Governor Teasdale's Advisory Council of Agriculture. He was honored by the Fredericktown Chamber of Commerce for his service to the community. In February 1983 he opened Bryson Funeral Home in Pilot Knob, MO. At that time he pledged to the people of the valley to try to provide a service that would help them during their time of grief and sorrow. He dedicated the building to his parents, Delmar and Minnie Bryson who lived and died in the valley that they loved so much. Dr. Bryson is a member of the Arcadia Valley Elks Lodge. He was a member of the Blue Lodge Star of the West in Ironton, a member of the Moolah Shrine Temple, and a member of the Scottish York Rite. He was a member of the Fredericktown United Methodist Church. Doc loved his family, was always willing to help a friend, and would never pass up a good or bad game of golf. He also loved music of all types but especially gospel and blue grass.

The family of Dr. William "Doc" Bryson created this Life Tributes page to make it easy to share your memories.

Send flowers to the Bryson family.