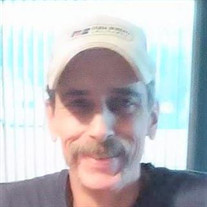 Von Le Allen Palmer of Ironton, Missouri passed away April 28, 2020 at the age of 54 years. He was born October 21, 1965 in St. Louis, Missouri to the late Von D. Palmer and Elizabeth Ann (Drusch) Palmer Woody. Von is survived by two sisters; Dawn Swinger of Myrtle Beach, South Carolina and Robin Lee Marcum of Cincinnati, Ohio, and two daughters; Amanda Brewer Robinson and husband, Duke, of Oxford, Ohio and Lisa Palmer of Farmington, Missouri. Also surviving are three grandchildren; Duke II Robinson, Guienevere Robinson and Thomas Robinson, his nephew, Jonathan Reed of Ironton, as well as a host of aunts, uncles, nieces, nephews other relatives and friends. In addition to his parents, Von was preceded in death by his sister, Kim Ann Woody. Von worked at Kozy Korner, Bailey Jo’s, and Duck on the Rock for many years. While working in the restaurant industry, Von made numerous friends, both with customers and coworkers. He was also a handyman, enjoyed yardwork and working on old cars. There are no services planned at this time. Von’s cremains will be interred with his mother at Workman Cemetery in Park Hills, Missouri.

The family of Von Le Allen Palmer created this Life Tributes page to make it easy to share your memories.

Send flowers to the Palmer family.