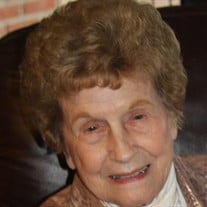 Virginia Josephine (Baker) Green, 93, of Jefferson City, Missouri passed away October 20, 2020 at St. Mary’s Hospital in Jefferson City. She was born in Black, Missouri on June 10, 1927, the daughter of Hallie Ray Baker and Arleen Lydia (Winegar) Baker (Hawkins). She married Arthur James (Art) Green August 23, 1947 and resided in Pilot Knob, Missouri. They shared 62 years of marriage together. She was a member of the First Baptist Church in Pilot Knob. Following her 1946 graduation from Lesterville High School, Virginia worked as a telephone operator and as a shoe assembler for Trimfoot Shoe Factory before continuing her education at Mineral Area College and completing the LPN program. She then worked as an operating room and emergency room nurse at St. Mary’s Arcadia Valley Hospital until retirement. Virginia moved to Primrose Retirement Center Jefferson City in 2015 to be closer to her family. She had always enjoyed an active life with her family and friends, and this continued in Jefferson City. She enjoyed the activities and games at Primrose and became a champion Wii bowler. Her lifelong love for flowers continued in Jefferson City where her tiny deck was known for its beauty. She was preceded in death by her husband, parents, brothers (Robert and Gene Baker), and sister (Betty Hawkins Bankston). She is survived by her sons James Michael Green (Susan), Danny Joe Green (Kay), Jefferson City; three grandchildren, Dan Green of Chicago, IL, Derek Green (Tricia) of Lillington NC, and Heather (Craig) Davenport of Jefferson City; and three great grandchildren and one step great grandchild. The family requests that COVID-19 social distancing guidelines be followed and a protective mask be worn while in attendance. In lieu of flowers, memorial contributions are suggested to First Baptist Church of Pilot Knob, 104 East Elm Street, Pilot Knob, MO 63663.

The family of Virginia Josephine Green created this Life Tributes page to make it easy to share your memories.

Send flowers to the Green family.