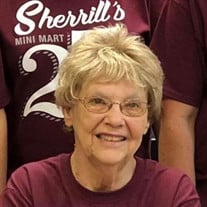 Virginia Faye Sherrill, known to most as “Ginny” passed away November 13, 2019 at her home at the age of 81 years. She was born February 28, 1938 in Centerville, Missouri the daughter of the late John Buell and Jewell Vivian (Harrison) Bowles. On January 11, 1958 she was united in marriage to Raymond Dale “R.D.” Sherrill who preceded her in death on January 19, 2003. To this union four children were born; Linda Whitener and husband, Dennis of Nashville, IL, Kenny Sherrill of Annapolis, Barbie Savage of Annapolis and Carol Williams and husband, Tim also of Annapolis. Ginny is survived by three sisters; Jean Bowles of Annapolis, Helen Breitenfeld of St. Louis, and Velma Kelley of Fenton, five grandchildren; Mandy Bollinger (Terry), Sherrill Whitener (Mike), Kelley Whitener (James), Kristen Sherrill, Daniel Whitener (Leah), two great grandchildren; Lexie Bollinger and Wyatt Sherrill, and her brothers and sisters in law; Donald Bud and JoAnn Sherrill, Francis Govro and Imogene Lannert, as well as a host of nieces, nephews, other relatives and friends. In addition to her parents and husband, Ginny was preceded in death by her grandson; Brandon Sherrill, five brothers-in-law; Marvin Breitenfeld, Harold Kelley, Bill Davis, Fred Seitz and Norb Lannert, three sisters-in-law; Betty Davis, Hilda Govro and Yvonne Seitz, and her mother and father-in-law, Sherman and Zora Sherrill. Ginny was a member of the Centerville 1st Baptist Church and she attended the Happy Zion General Baptist Church in Annapolis. In 1965 Ginny and R.D. purchased S & S Lumber and Ginny was the bookkeeper. They later opened Sherrill’s Mini Mart and together they have continually been in business for over 60 years. They have employed many people from the Annapolis area. Ginny was a member of the Crazy Quilters and she enjoyed crocheting and embroidery as well as quilting. She also enjoyed fishing and Cardinal Baseball games. She fed hundreds of Hummingbirds at her home, sometimes filling the feeders three times a day. This has been a hobby for over forty years and everyone who visited her home would comment on the beautiful Hummingbirds that could be viewed from her front window. Ginny served as the Treasurer of the Annapolis Lewis Cemetery Association for twenty-six years. In lieu of flowers memorials may be made to the Annapolis Lewis Cemetery Association.

Virginia Faye Sherrill, known to most as &#8220;Ginny&#8221; passed away November 13, 2019 at her home at the age of 81 years. She was born February 28, 1938 in Centerville, Missouri the daughter of the late John Buell and Jewell Vivian (Harrison)... View Obituary & Service Information

The family of Virginia "Ginny" Faye Sherrill created this Life Tributes page to make it easy to share your memories.

Virginia Faye Sherrill, known to most as “Ginny” passed away...

Customized sympathy cards. Mailed for you.