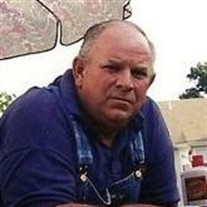 Virgil Eugene Janis known to most as “Gene” passed away March 28, 2019 at the age of 74 years. He was born October 20, 1944 in St. Louis, Missouri the son of the late Virgil Aubrey and Yetta (Carty) Janis. Gene is survived by his daughter, Julie Alphin and husband, Michael of Yantis, Texas, his special friend and caretaker, Barbara Hurt of Ironton, Missouri, brother, Darrell Janis of St. Louis, Missouri, special cousin, Donna Culler and husband, Gary of St. Louis, Missouri, his friend, Charlie Kitchens of Ironton, and three granddaughters; Emma, Chloe, and Olivia Alphin all of Yantis, Texas. In addition to his parents Gene was preceded in death by his sister, Sharon Miller. Gene served his country in the United States Army during the Vietnam War era. He enjoyed drinking coffee with his friends in local coffee shops.

The family of Virgil Eugene "Gene" Janis created this Life Tributes page to make it easy to share your memories.

Virgil Eugene Janis known to most as “Gene” passed away March...

Send flowers to the Janis family.