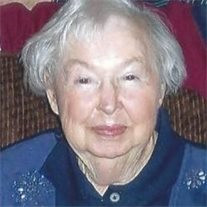 Velma Earline Tate of Ironton, MO passed away August 10, 2013 in St. Louis, MO at the age of 85 years. She was born June 10, 1928 in Ironton, MO the daughter of John Franklin and Daisy Belle (Chasten) Chitwood. On February 24, 1950 she was united in marriage to Willard Earl Tate who preceded her in death on February 22, 2002. To this union two children were born; William and wife Terry Tate of Ironton, MO and Virginia and husband Jack Queen also of Ironton, MO. In addition to her children she is survived by five grandchildren; Craig Queen, Misty Townsend, Chris Queen, Brandi Brogan and Ashley Turnbough and five great grandchildren; Carter, Riley, Reese, Braelyn and Briar, as well as a host of nieces, nephews, other relatives and many friends. Velma was preceded in death by a sister, Oma Thurman, and three brothers; Omer Chitwood, Virgil Chitwood and her twin Lindell Chitwood who died at birth. Velma worked as a seamstress at New Era Shirt Factory and she also enjoyed sewing for her family. In addition to sewing she enjoyed quilting and has made numerous quilts over the years. She had a great love for gardening and enjoyed growing vegetables and flowers. She was a member of Stouts Creek Baptist Church and she also attended Arcadia Valley United Methodist Church. Funeral services will be held on Wednesday, August 14, 2013 at 11:00 a.m. from Bryson Funeral Home Chapel with Rev. Carol Blackwell officiating. Visitation will be on Tuesday evening from 5 – 8 p.m. Interment will be in Arcadia Valley Memorial Park. Pallbearers will be Craig Queen, Chris Queen, Austin Townsend, Tommy Brogan, Ricky Turnbough, T-Ray Lambert and Honorary Pallbearer, Carter Brogan. Memorials may be made to the Arcadia Valley United Methodist Church or the Arcadia Valley Food Pantry.

The family of Velma Earline Tate created this Life Tributes page to make it easy to share your memories.

Send flowers to the Tate family.