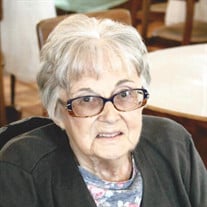 Treva Allen West of Ironton, Missouri passed away September 1, 2019 in Park Hills, Missouri at the age of seventy-seven years. She was surrounded by her loving family. She was born June 27, 1942 the daughter of the late Prince Allen and Reba (Plank) Mounce. On March 28, 1963 she was united in marriage to James E. West who preceded her in death on May 19, 2016. Treva is survived by eight children; James “Eddie” West Jr. (Kim) of Benbrook, Texas, Mike West of Viburnum, Missouri, Fred West of Ironton, Missouri, Rodney West (Amanda) of Pilot Knob, Missouri, Catana West of Farmington, Missouri, Tammy Moise (Tommy) of Belleview, Missouri, Rick West of Graniteville, Missouri, and Christal Jones (Toby) of Middlebrook, Missouri. Treva is also survived by five sisters; Marvadean Brooks, Noema Gearhart (Manuel), Paula Sanders (Ralph), Darlene Tucker (Stanley), and Kim Mounce all of Salem, Missouri, three brothers; Kenneth Mounce (Carmen) of Viburnum, Missouri, Gary Mounce of Salem, Missouri, and Bernie Mounce (Sue) of Ironton, Missouri, brother-in-law, Walter Sanders of Salem, Missouri, eighteen grandchildren, ten great grandchildren, as well as a host of nieces, nephews, other relatives and many, many friends. In addition to her parents and husband, Treva was preceded in death by her grandson, Gavin West, her sister, Kathy Sanders, her daughter-in-law, Debra West, and her brother-in-law, Bud Brooks and twin sisters who were stillborn. Treva was a loving wife, mother, grandmother, sister, aunt, and friend. She was a talented artist who enjoyed drawing and painting and making crafts of all kinds. Going to Hobby Lobby was one of her favorite outings. She also liked nature and spending time outdoors. The past few months she loved to sit by the fishpond and listen to the waterfall. Most of all she loved spending time with her children and grandchildren.

Treva Allen West of Ironton, Missouri passed away September 1, 2019 in Park Hills, Missouri at the age of seventy-seven years. She was surrounded by her loving family. She was born June 27, 1942 the daughter of the late Prince Allen and Reba... View Obituary & Service Information

The family of Treva Allen West created this Life Tributes page to make it easy to share your memories.

Send flowers to the West family.