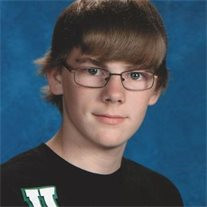 Thatcher Nathaneil Carr of Arcadia, MO passed away November 21, 2014 in Pilot Knob at the age of 16 years. He was born September 25, 1998 in Pilot Knob, MO the son of John Eugene Carr Jr of Annapolis, MO and Erin Rebecca Light of Arcadia, MO. Thatcher is survived by three brothers; Logan Carr of Casper, WY, Tyler Womble of Middlebrook, MO, Henry Braxton Carr of Annapolis, MO, and his adopted brother, Jake Parker of Casper, WY, three cousins; Megan Marler, Madelyn Marler, and Riley Parker, his maternal grandparents; Lisa and Eric Light of Arcadia, MO, his paternal grandparents; John and Karen Carr Sr of Ironton, MO, his maternal great grandparents; Paul and Barbara Graham of Arcadia, MO, his best friend, Jacob Critser, as well as a clan of aunts, uncles, cousins, other relatives and many, many friends. Thatcher was a member of Glover Baptist Church. He was a student at Arcadia Valley High School. He was a member of the track team, served as a cadet teacher and tutor, and he was a student in the gifted program. Thatcher was also a member of the Boy Scouts of America. He enjoyed hunting, fishing, outdoor adventures, and spending time with family and friends.

The family of Thatcher Nathaneil Carr created this Life Tributes page to make it easy to share your memories.

Send flowers to the Carr family.