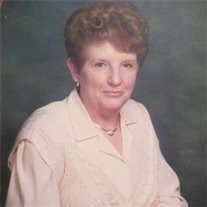 Shirley Belle Crocker of Belleview, Missouri passed away March 6, 2017 in St. Louis, Missouri at the age of 81 years. She was born July 4, 1935 in Goodland, Missouri the daughter of the late Tony Otto and Ethel Ann (Rencehausen) Goggin. Shirley... View Obituary & Service Information

The family of Shirley Belle Crocker created this Life Tributes page to make it easy to share your memories.

Send flowers to the Crocker family.