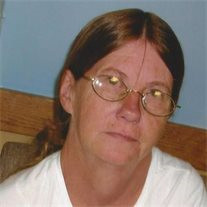 Sharon Kay Volner of Middlebrook, MO passed away May 22, 2014 in Farmington, MO at the age of 51 years. She was born February 18, 1963 in Ironton, MO the daughter of the late Harvey and Lena (Black) Tripp. On October 12, 1996 she was united in marriage to Steven Eugene Volner who survives. Also surviving are her two daughters; Crystal and husband Heath Fitzgerald of Black, MO and Angel and husband Brandon Racer of Fredericktown, MO, two stepdaughters; Rhonda Volner of Ironton, MO and Sarah and husband Joe Miller of Sikeston, MO, five grandchildren; Braidon, Dakota, Makayla, Lucas, and Krysta, one sister; Donna Whitley of Farmington, MO, and a brother; Ernie Tripp of Bismarck, MO as well as a host of nieces, nephews, other relatives and friends. Sharon was preceded in death by a brother, Kenny Tripp and a sister, Peggy Tripp. Sharon was a graduate of Farmington High School. For many years she worked as a cook for several local restaurants including Belle's Station and Kozy Korner.

The family of Sharon Kay Volner created this Life Tributes page to make it easy to share your memories.

Send flowers to the Volner family.