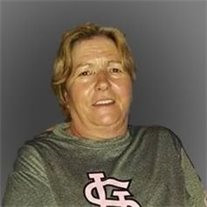 Sharon Kaye Tripp of Ironton, Missouri passed away November 5, 2016 in Des Peres, Missouri at the age of 58 years. She was born August 6, 1958 in St. Louis, Missouri the daughter of the late Irving and Sarah Emma (Oberts) Porter. Sharon is... View Obituary & Service Information

The family of Sharon Kaye Tripp created this Life Tributes page to make it easy to share your memories.

Send flowers to the Tripp family.