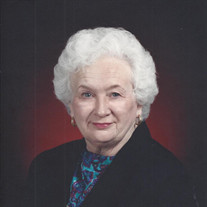 Ruth Ann (Calvert) Brooks, passed away October 10, 2021 in St. Louis, Missouri at the age of 85 years. She was born October 14, 1935, in Arcadia, Missouri the daughter of the late Marshall Stephen and Carolina Lena (Selinger) Calvert. Ruth, known to most of the Valley as “Oma” was adored and loved by all who knew her. Her daughter, grandchildren, and great grandchildren, were the pride and joy of her life. The legacy of her witty spirit, passion for bingo, love of rescuing animals, and dedication to cooking her award-winning chicken and dumplings (even though she despised chicken) will live on through them. Oma could be found at Desi’s Diner most mornings, drinking coffee with the locals, while stealing potatoes off her sister’s plate, and making everyone look at photos of her grandbabies. She liked to follow this up by browsing every thrift store in town, sometimes buying her family members items that they had donated. To know her was to love her, and she proved it by unofficially adopting every person who didn’t have a family to spend holidays with. Oma’s heart extended beyond her family and friends, as her biggest passion was animals. Her family is confident that she was greeted at the rainbow bridge by at least 1, 747 wagging tails. She was known to commit misdemeanors by sneaking onto private property in her nightgown, before the sun came up, to feed neighborhood cats. Oma passed on her spectacular cooking and baking skills to her girls and made sure to tell everyone that would listen that the Calvert genes ran strong. She never met a cause she didn’t donate to, whether it be a stray that needed surgery, a child that needed a warm meal or the State of Missouri as she generously supported the school system thru scratch offs and bingo. She leaves behind a void that her five-layer German chocolate cake could not fill, and a family who will always wonder if she really pushed her grandson off the teeter totter or if it was truly the accident she claimed. On her last pull of the slot machine of life, she won the jackpot called heaven. She leaves behind a community to mourn the loss of the “superior commander” of North Shepherd Street. Those left to mourn her death include her daughter: Debra Allen and husband, Russ of Ironton, Missouri, two grandchildren: Megan Harbison and husband, Tim of Ironton, Tim Allen, and wife Erica of Imperial, and three great grandchildren: Emerson Harbison, and Everett and Elijah Allen. Two sisters also survive: Helen Davis of Paducah, Kentucky and Edna Eoff of Marysville, Washington. Ruth was preceded in death by two brothers: Russell Calvert and James Calvert and two sisters: Barbara Emery and Dorothy Carty. Visitation will be held on Friday, October 15, 2021, from 11:00 a.m. until 1:00 p.m. with her service beginning at 1:00 p.m. Pastor Barron Willer will be officiating. Interment will follow in Arcadia Memorial Park. Memorials may be made to Stray Rescue St. Louis at 2320 Pine Street, St. Louis, MO 63103 or strayrescue.org.

Ruth Ann (Calvert) Brooks, passed away October 10, 2021 in St. Louis, Missouri at the age of 85 years. She was born October 14, 1935, in Arcadia, Missouri the daughter of the late Marshall Stephen and Carolina Lena (Selinger) Calvert. Ruth,... View Obituary & Service Information

The family of Ruth Ann Brooks created this Life Tributes page to make it easy to share your memories.

Send flowers to the Brooks family.