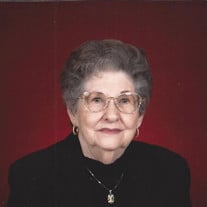 Rosalie (Reed) Fox was born in Banner MO, November 27, 1931, the oldest daughter of Robert Leroy Reed and Leva Mae Thompson Reed. She passed away surrounded by her loving family on December 21, 2020 in Ironton, Missouri at the age of 89 years and 24 days. In 1946 she married Harvey Ervin Queen and to this union two children were born: James Ervin and Terry Lynn. She married William R. Nash in 1972 and Bill passed away in 1975. On November 5, 1977, she was united in marriage to Robert C. Fox who preceded her in death on July 26, 2007. Rosalie was a long-time member of Arcadia Valley United Methodist Church. She served as organist for many years before her health made it necessary for her to retire. She worked at Jelina Tool in Bismarck in 1959, and then went to work for Continental Telephone Company (which later became CONTEL). She retired after 20 years, four of which she was a telephone switchboard operator and then became line assigner. Due to failing health, Rosalie made her home with daughter and husband, Terry, and Bill Tate for the last year and a half. Surviving are her daughter, Terry and husband, Bill Tate: granddaughters Misty and Austin Townsend of Hillsboro; Brandi and Tommy Brogan of Ironton; Ashley and Ricky Turnbough of Ironton; Robin and Adrian Funk of Louisville, KY; Holly and Sean Jones of Nashville, TN; grandsons Tony and Diana Queen of Lafayette, TN and Robert and Jennifer Queen of Leadwood, MO; daughter-in-law, Yolanda Queen of Layfette, TN; sisters, Eleanor and Bob Brothers of Villa Ridge, MO and Shirley Zapf of Bismarck, MO; bonus children, Darlene (Mike) Stilts of St. Charles, MO; Cheryl (Greg) Plodzien of St. Charles, MO; Merilee (Barry) Shelton of Lake St. Louis, MO; Chris (Debbie) Nash of High Ridge, MO and Kathi Thuston of Mehlville, MO. Several nieces, nephews, other relatives, and many friends survive. In addition to her parents and husbands, she was preceded in death by her son, James Ervin Queen; and a bonus son, William Nash, Jr. Memorials may be made to the Arcadia Valley United Methodist Church or The American Lung Association.

Rosalie (Reed) Fox was born in Banner MO, November 27, 1931, the oldest daughter of Robert Leroy Reed and Leva Mae Thompson Reed. She passed away surrounded by her loving family on December 21, 2020 in Ironton, Missouri at the age of 89 years... View Obituary & Service Information

The family of Rosalie Fox created this Life Tributes page to make it easy to share your memories.

Send flowers to the Fox family.