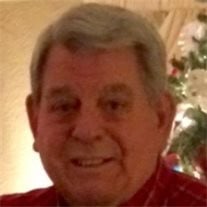 Roger Cordell McHenry of Ironton, Missouri was a wonderful husband, father, PaPa, brother, son, uncle and friend. He passed away January 28, 2016 in St. Louis, Missouri at the age of 82 years after a full and well lived life. He was born January 24, 1934 in Lesterville, Missouri the son of the late Guy and Willie "Bobbye" (Adams) McHenry. On February 10, 1968 he was united in marriage to his dearly loved wife, Kay Frances Gray who survives. To this union three children were born; Kamie Eckert and husband Kent of Chesterfield, Missouri, Kimberly Bell and husband Jamie of Pilot Knob, Missouri, and Brett McHenry of Ironton, Missouri. Also surviving is his sister, Marian Loyd of Afton, Missouri, six grandchildren; Ryan, Kordell, Brock, Kayla, Peyton, and Grant, as well as a host of nieces, nephews, other relatives and friends. Roger's world centered around his family and he took tremendous pleasure in watching his kids and grandkids grow up, play ball and listen to his stories. In addition to his parents, Roger was preceded in death by his brother and best friend, Robert McHenry and his sister, Hallie Paulter. Roger lived his entire life in the Iron County area and was the owner of McHenry's Store in Hogan for more than twenty years. He enjoyed cattle farming with his brother and owned farms for most of his life. Roger served his country in the United States Army, and served his community in many ways including the South Iron School Board, the First State Community Bank Board and the University of Missouri Extension Council. He was proud of the work he did with the Child Friendship Center and the Signer Senior Center Advisory Board. He was a charter member of the Arcadia Valley Elks Club and he was a member of the VFW Post in Ironton. Funeral services will be held on Sunday, January 31, 2016 at 2:00 p.m. at Bryson Funeral Home in Pilot Knob. Visitation will begin at 1:00 p.m. prior to the funeral. There will be a visitation on Saturday evening from 4 – 8 p.m. at Bryson Funeral Home. Memorials may be made to Stouts Creek Baptist Church.

Roger Cordell McHenry of Ironton, Missouri was a wonderful husband, father, PaPa, brother, son, uncle and friend. He passed away January 28, 2016 in St. Louis, Missouri at the age of 82 years after a full and well lived life. He was born January... View Obituary & Service Information

The family of Roger Cordell McHenry created this Life Tributes page to make it easy to share your memories.

Roger Cordell McHenry of Ironton, Missouri was a wonderful husband,...

Send flowers to the McHenry family.