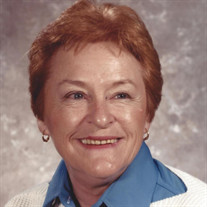 Roberta (Ringo) Collins Thompson of Ironton, Missouri passed away on September 1, 2020 in Pilot Knob, Missouri at the age of 98 years. She was born August 4, 1922 in Ironton, Missouri the daughter of Malcolm Price and Hester Jane (Rudy) Ringo. Roberta was married to Albert “Al” Collins in 1941 and he preceded her in death in 1955. In 1959 she married Wilburn “Bud” Thompson and he preceded her in death in 1995. Roberta is survived by her children: A.J. Collins and wife, Katharine of Farmington, Missouri; Mary Stricklin and husband, Jim of Ironton, Missouri; Dennis Collins and wife, Terri of Farmington, Missouri; Pete Thompson and wife, Karen of Belleville, Illinois; her stepdaughter, Sandy Thompson of Ironton, Missouri, her sons-in-law; Charles Koenig of St. Louis, Missouri, Tom Thomas of Ripley, Tennessee, and George Rogers of St. Louis, Missouri. Also surviving are her sister, Annette Miller of Sherman, Texas, seventeen grandchildren, twenty-nine great-grandchildren, one great-great granddaughter, and a host of nieces, nephews, other relatives, and wonderful friends. Roberta was preceded in death by her children: Diana Koenig, Ann Thomas, Ellen Rogers, Doug Thompson and her stepson, Donald Thompson. She was also preceded by her sister, Evelyn (Ringo) Lindberg, and her brothers; Malcolm “Mack” Ringo, and Robert Ringo. Roberta graduated from Ironton High School in 1938. She received her Associate degree from Flat River Junior College in 1964 and went on to Southeast Missouri State University where she obtained her Bachelor of Science in Education in May of 1966. She taught History and English in the Leadwood and Fredericktown School Districts. She was a member of Ste. Marie du Lac Catholic Church. Roberta loved horses, especially American Saddlebreds and she was a member of the Saddle Club. She showed horses for many years, including her most beloved horse, Rex. She kept Rex for many years at her home stable until he died at the age of 34 years. She was an avid bridge player and belonged to several bridge clubs including the Fort Nightly Bridge Club. She loved to play bridge with her friends. She was a member of the Missouri State Teacher’s Association and the Red Hat Club. Private graveside services for immediate family will be held at Arcadia Valley Memorial Park. Due to COVID-19 a visitation and Memorial Mass for friends and family will be held in the future. Online condolences may be made to the family on this website.

Roberta (Ringo) Collins Thompson of Ironton, Missouri passed away on September 1, 2020 in Pilot Knob, Missouri at the age of 98 years. She was born August 4, 1922 in Ironton, Missouri the daughter of Malcolm Price and Hester Jane (Rudy) Ringo. Roberta... View Obituary & Service Information

The family of Roberta (Ringo) Thompson created this Life Tributes page to make it easy to share your memories.