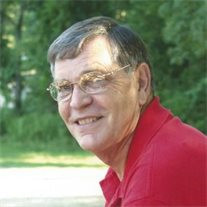 Robert Warren Jones of Ironton, MO passed away August 15, 2014 in Pilot Knob, MO at the age of 71 years. He was born March 11, 1943 in Newton County, MO the son of the late Eugene Waymon and Janice Marvel (Mallory) Jones. On April 15, 1995 he was united in marriage to Linda Lee Chaffin who survives. In addition to his wife he is survived by his son, Ben and wife Jill Jones of Hillard, OH, his stepchildren; Kristen Pryor of Cleveland, OH, Ian Eddy of St. Peters, MO, Laurel and husband Josh Burton of San Antonio, TX, Daniel Grubbs and wife Sarah of Park Hills, MO, David Grubbs of Springfield, MO, and Jessica Grubbs of Ironton, MO. Bob is also survived by two brothers; Larry and wife Betty Jones of Ash Grove, MO, Leon and wife Karen Jones of O'Fallon MO, a sister; Sharon and husband Jim Morgan of Fairview, MO, nine grandchildren, two great grandchildren as well as a host of nieces, nephews, other relatives and many many friends. He was well loved by all who knew him. Bob was a graduate of Columbia University in Jefferson City, MO and Washington University in St. Louis, MO. He worked in genetics and as a Lab Manager at Washington University. He most recently worked with Steve Schulte as an accountant. He was a member of the Arcadia Valley Assembly of God Church and the Arcadia Valley Elks Lodge.

The family of Robert Warren Jones created this Life Tributes page to make it easy to share your memories.