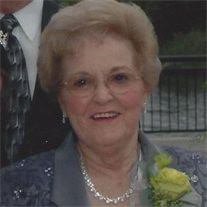 On January 22, 2015, Evelyn Ramona Reese, lovingly known as "Mona", left this world and was embraced by her heavenly father. Daughter of Leon and Hazel Sutton, Mona was born on April 28, 1937 in St. Louis, Missouri. She was a 1955 graduate of Ironton High School. Being a proud alumni of the '55ers, she enjoyed coordinating class get-togethers and reunions. She married her high school crush, Jack Reese, Jr., on April 5th, 1958, and celebrated 56 years together as Jack's "Brown-eyed Sweetie". To this union were born three daughters: Alisa, Janet, and Jill. Mona was a life-long member of Marble Creek United Baptist Church in Arcadia, Missouri. She loved being a Sunday School Teacher and camp counselor at Bethel United Baptist Bible Camp. In her younger days, Mona was very athletic and known to be more than a little competitive. Whether it was softball, bowling, or golf, she gave 100%. One of her most notable achievements was a Hole-In-One on the 9th hole at Arcadia Valley Country Club, which she was a member for many years. Mona was a talented seamstress; most notably for her quilts and doll clothes. She loved gardening and was a beautiful Alto singer. She worked at various jobs including the Brown Shoe Company, The Seven County Shopper newspaper, Cady's Funeral Home, and owned an antique shop, but for most of her life she was a caregiver. Mona touched many lives and was a witness of her faith to anyone that she met. She was incredibly loved by her family and friends. Surviving are her husband Jack Reese, of Arcadia, Missouri; her daughters, Alisa Cowsert and husband Tom, of Chesapeake, Virginia, Janet Duncan and husband Brett, of Ironton, Missouri, and Jill Goldsmith and husband Jimi, of Doe Run, Missouri. Mona is also survived by her brothers Fred Sutton and wife Nelda, of Sweeny, Texas, Larry Sutton and wife Cindy, of Arcadia, Missouri, Mark Sutton and wife Sheree, of Arcadia, Missouri, Johnny Wilson and wife Jeannie, of Stanford, Arizona, and Mike Wilson and wife Ruth, of St. Louis, Missouri. She was preceded in death by her parents, Herman Leon and Hazel Virginia Sutton and her brother Eddie Sutton. Also surviving are her 5 grandchildren that she adored: Bryon Goodwin, Larissa Stewart, Elliott Duncan, Skyler Sanzotera, and Faith Sanzotera. She has 3 great-grandchildren, many beloved nieces, nephews, and friends.

On January 22, 2015, Evelyn Ramona Reese, lovingly known as "Mona", left this world and was embraced by her heavenly father. Daughter of Leon and Hazel Sutton, Mona was born on April 28, 1937 in St. Louis, Missouri. She was a 1955 graduate of... View Obituary & Service Information

The family of Ramona Reese created this Life Tributes page to make it easy to share your memories.

Send flowers to the Reese family.