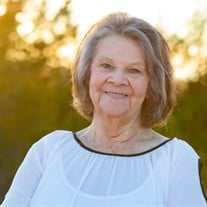 Peggy Jean Browers of Ironton, Missouri passed away on October 18, 2021, at the age of 73 years. She was born on December 12, 1947, in Graniteville, Missouri to the late Lawnie and Zella “Marie” (Volner) Barton. On December 30, 1967, she was united in marriage to Ronald Browers I, who survives and resides in Ironton, Missouri. Peggy is survived by her children: Stacy (Allen) Mooneyhan of Jonesboro, Arkansas; Ronnie (Amy) Browers II of Fredericktown, Missouri; her sister, Kathy (Ronnie) Mayberry of Ironton, Missouri; four grandchildren: Carissa (Garret) Woodall, Cody Mooneyhan, Spencer Mooneyhan, and Wyatt Browers; as well as a host of nieces, nephews, other relatives, and many friends. In addition to her parents, Peggy was preceded in death by her infant son, Randall Browers who was an identical twin to her son, Ronnie. Four brothers also precede her in death: Vernon Volner, Roy Volner, Jerry Volner, and Lonnie “Guy” Barton; and three sisters: Lela Stricklan, Mary Horton, and Betty Asher. Peggy was a 1965 graduate of Valle High School. She was a loving wife, a fantastic mother, and an extraordinary Gram and MiMi. She was the epitome of loving others more than yourself. She loved her family deeply. She and her husband spent 53 years building a life together as inseparable companions. Peggy was exceptionally giving and went above and beyond to meet the needs of her family. Being a grandmother was her greatest passion. She poured into the lives of her grandchildren whom she considered her finest blessings. Peggy and Ron devoted their lives to the Lord. Attending church together brought them both great joy. She was an avid reader, especially the Bible. Pegger’s sharp intellect will be missed. Her family often relied on her as their personal encyclopedia and historian. She lived modestly and often said. “I love my life.” Everyone who knew her knew that she would speak the truth. She spoke her opinions boldly and stood up for what she believed. The phrase Live, Laugh, Love is a true reflection of who she was. Funeral services will be held on Monday, October 25, 2021, at 11:00 A.M. from Bryson Funeral Home Chapel with Pastor Rick Hensley officiating. Visitation will be on Sunday, October 24, 2021, from 2:00 P.M to 4:00 P.M. Interment will be in the Graniteville Cemetery.

The family of Peggy Jean Browers created this Life Tributes page to make it easy to share your memories.

Peggy Jean Browers of Ironton, Missouri passed away on October...