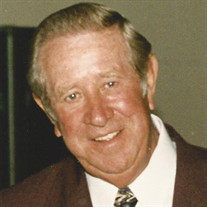 Paul Norman Anderson of Pilot Knob, Missouri, passed away on November 25, 2020 at the age of 94 years. He was born on June 3, 1926 in Ironton, Missouri the son of the late Raymond Powell and Myrtle Mae (Ashlock) Anderson. On October 22, 1948 he was united in marriage to Dorothy Elizabeth Siebert who preceded him in death on December 18, 2009. To this union, three sons were born: Stan Anderson and wife, Patty of Belleview, Missouri; Kevin Anderson and wife, Connie of Farmington, Missouri, and Tony Anderson who preceded him in death. Paul is also survived by his sister, Jean Moser and husband, Don of Inverness, Florida, five grandchildren, eleven great grandchildren and two great great grandchildren, as well as a host of nieces, nephews, other relatives, and friends. Paul was preceded in death by his brother, Howard Anderson, and sister-in-law Shirley Anderson. Paul was a 1944 graduate of Ironton High School. He served our country as a Master Sargent in the United States Army during WWII where he was stationed in the Philippines. Paul was the Vice President of Weis Heating and Cooling in St. Louis. Upon returning to the Arcadia Valley, he and wife Dorothy, owned and operated Andy’s restaurant for many years. Paul was a member of St. Paul Lutheran Church. Paul served on the Board of Directors for the Ironton First State Community Bank for over thirty years. He was also a member of the Arcadia Valley Country Club, the Arcadia Valley Elks, Arcadia Valley Eagles, and was a member of the Ironton AF and AM Masonic Lodge. Memorials may be made to St. Paul’s Lutheran Church 101 East Dent Street Ironton, Missouri 63650. All family members and guests are required to wear a mask while visiting our facility. Social distancing is also expected to keep family members and staff safe. Thank you for your cooperation and understanding.

Paul Norman Anderson of Pilot Knob, Missouri, passed away on November 25, 2020 at the age of 94 years. He was born on June 3, 1926 in Ironton, Missouri the son of the late Raymond Powell and Myrtle Mae (Ashlock) Anderson. On October 22, 1948... View Obituary & Service Information

The family of Paul Norman Anderson created this Life Tributes page to make it easy to share your memories.

Paul Norman Anderson of Pilot Knob, Missouri, passed away on...

Send flowers to the Anderson family.