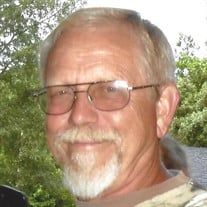 Norman Matthew Thomlinson, known to most as “Sonny” passed away February 22, 2020 at Jefferson Mercy Hospital at the age of 66 years. He was born July 5, 1953 in Ironton, Missouri the son of the late Herbert “Jewell” and Charlotte “Ferne” (Jinkerson) Thomlinson. Sonny is survived by three children; Amy Graham and husband, Josh of Bismarck, Missouri, Jill DeNoyer of Herculaneum, Missouri, and Scott Thomlinson and wife, Martha of Springfield, Missouri. Sonny is also survived by his long time partner, Joyce Mayberry of Pilot Knob, Missouri, eleven grandchildren, two great grandchildren, his sister; Lisa Stribling and husband, Darin of Willard, Missouri, and four brothers; Melvin Thomlinson and wife, Melanie of Middlebrook, Tom Thomlinson and wife, Mary of Ironton, Howie Thomlinson of Ironton, and Richard “Paul” Thomlinson of Springfield as well as a host of nieces, nephews, other relatives and friends. In addition to his parents, Sonny was preceded in death by his wife Evelyn Whited in 2005 and three brothers; Donald “Duck” Thomlinson, Marvin Thomlinson and Mark Thomlinson. Sonny worked in construction and he enjoyed fishing. He also loved music. He played the guitar and he especially enjoyed playing music with his family.

The family of Norman "Sonny" Thomlinson created this Life Tributes page to make it easy to share your memories.

Norman Matthew Thomlinson, known to most as “Sonny” passed away...

Send flowers to the Thomlinson family.