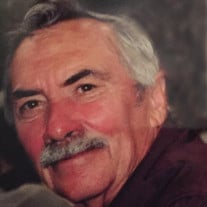 Norman Oman Lambert, known to many as “Bud” and to some as “Dry Bones” passed away July 9, 2019 at Mercy Jefferson Hospital at the age of 80 years old. He was born April 25, 1939 in Imboden, Missouri the son of the late Lawrence and Dorothy (Miller) Lambert. On May 11, 1957 he was united in marriage to the love of his life for 62 years, Aleeta Nadine McIntyre who survives. To this union four children were born; Barbara Mehranfar and husband, Masoud of Wildwood, Missouri, Terri Furry and husband, Kevin of Imboden, Missouri, Norman “Scott” Lambert and wife, Connie of Fenton, Missouri, and Jerry Lambert and wife Diana of Imboden, Missouri. Also surviving are his sister; Mary Ellen Boring and husband, Bob of Belleview, Missouri, and his brother; Larry Lambert and wife, Debby of Imboden, Missouri, eleven grandchildren, and one great grandson as well as a host of nieces, nephews, other relatives and many friends. In addition to his parents Bud was preceded in death by his sister; Deloris Fitzgerald and a great grandson. Bud was a member of New Hope Baptist Church, where he particularly loved to be involved with the music; playing, singing and most recently enthusiastically clapping along. Prior to retirement he had a variety of careers, beginning with Brown Shoe Company, and after moving to St. Louis worked for the Shipyards, was a cabinet maker, and later belonged to the U.A.W. working for Chrysler for eighteen years before early retirement. Outside of providing for his family, his true passion was for music. He loved old country, bluegrass, and church songs and could pick out almost any song on the guitar, harmonica and even the piano. He had a great voice and loved sharing his music with anyone that would play along or listen. In addition to music, he liked to tinker and was an all-around handyman. He was not afraid to attempt any project (self-taught TV repairman, mechanic, woodworker, etc.), and would help anyone fix or build anything. He proudly described himself as a “Jack of all trades and master of none.” He was happiest outdoors, whether he was mowing, cutting firewood, or playing horseshoes. He especially enjoyed gardening and found joy in just getting out of the house and working up a sweat. But his greatest accomplishment was being the best husband, father, grandfather, uncle and friend that you could ever hope to have. The family has designated the Alzheimer's Association or New Hope Baptist Church for memorials.

The family of Norman "Bud" Lambert created this Life Tributes page to make it easy to share your memories.

Norman Oman Lambert, known to many as “Bud” and to some as “Dry...

Send flowers to the Lambert family.