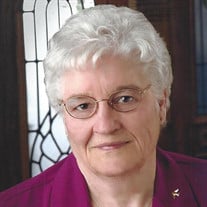 Nellie “Louise” Toppins of Vulcan passed away at her home on April 3, 2022 surrounded by her loving family. She was born October 5, 1930 in Minimum, Missouri the daughter of the late Charles Dallas and Nellie Ida (Jones) Hamilton. Louise was united in marriage to William “Bill” Toppins and they were the parents of six children: Vivian Warren (Charles “Bernie”) of Park Hills, Missouri, Ruth Kennedy of Malden, Missouri, Billie Edwards (John Sturgeon) of Park Hills, Missouri, Nancy Toppins who preceded her in death, Rita Reed (Brent) and Chuck Toppins of Annapolis, Missouri. Louise is also survived by her brother Drewie Hamilton of Annapolis, Missouri, twelve grandchildren, thirty-seven great grandchildren, and six great great grandchildren. Also surviving are her sister-in-law, Carol Hamilton of Annapolis, Missouri and her brother-in-law, Charles “Doodle” Sutton of Des Arc, Missouri as well as a host of nieces, nephews, other relatives, and many friends. In addition to her parents and daughter, Louise was preceded in death by two sisters: Sylvia Propst and Karion Sutton, two brothers: Homer Hamilton and LaVerne Hamilton, and one grandson, B.J. Edwards. Louise was a long-time faithful member of the Annapolis Church of the Nazarene. She was musically gifted and enjoyed singing, playing the guitar, and several other instruments. She was a member of the Wandering Widows and she enjoyed their friendships, travels, and meals together. Louise loved to craft and cook. She especially loved trying out new recipes on family members. Nothing was more important to Louise than her family. She loved the family reunion and was the organizer that pulled it all together. She loved the yearly sleepovers she had with her great granddaughters. Most of the grandchildren will remember the magical switch that Louise carried on the dash of her car – that is where they all learned to bob and weave and duck and cover. She will be missed by her many friends and family. Memorials may be made to the Annapolis Church of the Nazarene.

Nellie &#8220;Louise&#8221; Toppins of Vulcan passed away at her home on April 3, 2022 surrounded by her loving family. She was born October 5, 1930 in Minimum, Missouri the daughter of the late Charles Dallas and Nellie Ida (Jones) Hamilton. Louise... View Obituary & Service Information

The family of Nellie "Louise" Toppins created this Life Tributes page to make it easy to share your memories.

Nellie “Louise” Toppins of Vulcan passed away at her home on...

Send flowers to the Toppins family.