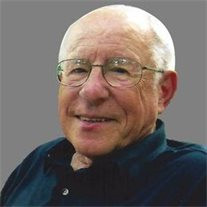 Mike Komar of Ironton, Missouri passed away September 27, 2015, at age 81. He was born August 31, 1934 in Desloge, Missouri, the son of the late Andrew and Anna (Pasternak) Komar. On November 17, 1962 he was united in marriage to Nancy Jane Queen who survives him. They had three children: Christy Komar Callmeyer (husband Ken) of St. Louis, Missouri, Jennifer Komar Olivarez (husband Enrique) of Minneapolis, Minnesota, and Thomas Komar of Chicago, Illinois. In addition to his children Mike is survived by his sister, Katherine White (husband Tom) of Chillicothe, Ohio, two brothers, John Komar (wife Jackie) of Ironton, Missouri, and Andrew Komar (wife Jeannie) of Moberly, Missouri, two granddaughters, Rachel Olivarez and Anna Olivarez as well as a host of nieces, nephews, and other relatives. In addition to his parents, Mike was also preceded in death by his in-laws, Harry and Rachel Queen. Mike graduated from St. Louis College of Pharmacy in 1959 and worked as a registered pharmacist for 52 years. Most of these were at Arcadia Valley Drug Store in Ironton, where Mike served for decades as a trusted member of the medical community. He often took calls at home and helped local customers after hours with needed prescriptions. Since his retirement in 1998, Mike made walking a daily habit. He and his wife Nancy were regularly spotted on their three-mile walk through historic Ironton. Mike also got great satisfaction from working in his yard and seeing his grandchildren, as well as reading, spending time with his cat, and watching sports, especially the St. Louis Cardinals. He was an active member of Ste. Marie du Lac Catholic Church, doing everything from counting the weekly collection to working on the church grounds. He also volunteered with the Arcadia Valley Food Pantry and served on the board of the local St. Vincent de Paul Society. Mike was an all-around good guy known for his dry sense of humor and his exceptional barbecue skills. Devoted to his family, he could always be counted on by Nancy, his children, and their families for support and trusted advice anytime, on any subject. He will be greatly missed by family and his many friends.

Mike Komar of Ironton, Missouri passed away September 27, 2015, at age 81. He was born August 31, 1934 in Desloge, Missouri, the son of the late Andrew and Anna (Pasternak) Komar. On November 17, 1962 he was united in marriage to Nancy Jane... View Obituary & Service Information

The family of Mike Komar created this Life Tributes page to make it easy to share your memories.

Send flowers to the Komar family.