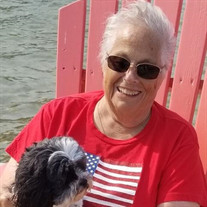 Mary Lowese Rouse Brown of Arcadia, Missouri passed away November 27, 2021, in Farmington, Missouri at the age of 83 years. She was born October 27, 1938, in Flushing, Michigan the daughter of the late Calvin F. and Beth Hand (Case) House. On March 31, 1956, she was united in marriage to Cecil “Duane” Rouse who preceded her in death on April 11, 2004. Mary later married Jerome “Jerry” Brown on June 18, 2013, and he preceded her in death on March 19, 2017. Mary is survived by three sons: John Rouse and wife, Karen of Mayville, Wisconsin, Darwin Rouse and wife, Katherine of Arcadia, Missouri, and Howard Rouse and wife, Gail of Fairview, Texas. She is also survived by eight grandchildren. Mary was preceded in death by a brother; Donald House and a sister; Betty Dolezal. Mary was a member of The Church of Jesus Christ of Latter-Day Saints. She was very involved with the church and served in many capacities. Mary was also a very independent and strong-willed woman. At the age of sixteen she got married and moved to Ethiopia with her husband. Mary was always a great caregiver, wife, mother, and mother-in-law. She always served others, and this was what brought her the most joy. She made friends easily and has been blessed with many lifelong friendships. A visitation period will be held on Tuesday, November 30, 2021, at Bryson Funeral Home Chapel in Pilot Knob, Missouri from 6:00 until 8:00 p.m. Another visitation will be held on Friday, December 3, 2021, at Buresh Kob Funeral Home in Tawas City, Michigan from 10:30 a.m. until 12:00 Noon. A funeral service will follow the visitation at Noon. Interment will be in Greenwood Cemetery in East Tawas, Michigan following the funeral service. Online condolences may be made to the family at www.brysonfuneralhome.com.

Mary Lowese Rouse Brown of Arcadia, Missouri passed away November 27, 2021, in Farmington, Missouri at the age of 83 years. She was born October 27, 1938, in Flushing, Michigan the daughter of the late Calvin F. and Beth Hand (Case) House. On... View Obituary & Service Information

The family of Mary Lowese Rouse-Brown created this Life Tributes page to make it easy to share your memories.

Send flowers to the Rouse-Brown family.