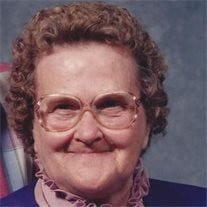 Mary Goldie Miller passed away January 17, 2013 in Doe Run, MO at the age of 87 years. Mary was born April 9, 1925, a daughter of the late Gus and Stella (Hill) Mickan. On February 23, 1946, she was united in marriage to Elvin H. Miller, who preceded her in death on November 22, 1999. To this union four daughters were born; Mary Ellen Ryan of House Springs, MO, Marilyn Posch of Fort Myers, FL, Carolyn Sue Cooley of Springfield, VA and Debbie (Butch) Reichert of Arcadia, MO. Also surviving are two brothers; Jim Mickan of Glover, MO and Bill Mickan of Park Hills, MO, a sister; Betty Mitchell of Branson, MO, 8 grandchildren, 11 great-grandchildren, 2 great-great grandchildren, her companion of eleven years Clyde Hurst Sr., as well as a host of other relatives and friends. In addition to her parents and husband, Mary was preceded in death by her brother; Nick Mickan, and a sister, Kathy Ford.

The family of Mary Goldie Miller created this Life Tributes page to make it easy to share your memories.

Send flowers to the Miller family.