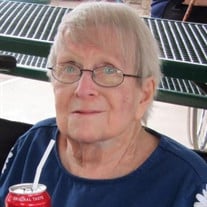 Mary Ann (Akers) Knight, age 87, died Saturday, July 3, 2021 at The Baptist Home in Ironton, Missouri. Mary Ann was born in St. Louis, Missouri on October 11, 1933. Her parents, Jesse Robert Akers and Carrie Ethel (Compton) Akers welcomed their third child but always said she was a surprise, arriving 12 years after her sister Mavis, and 14 years after her brother, Eddie. Mary Ann graduated from Ritenour High School and received an Associate degree from Hannibal-LaGrange College. She met her husband, Jerry Ray Knight, when he fell into her lap during a basketball game in which he was playing, and she was watching. They had two children; Nancy and Scott. The couple divorced in 1984. Mary Ann worked for TWA for a few years and then stayed home with her children until they were teens. She worked many yars for the City of Webster Groves in the fire department and the planning &development department. Dachshunds were her favorite dogs although she loved every dog she ever met. She bred and showed dachshunds and had two champions. And, they are “dachshunds” not “weiner dogs”, by the way. She loved chocolate almost as much as she loved dogs. Mary Ann sang beautifully and served in church choirs throughout her life. She was a talented seamstress and made her clothes, her daughter’s clothes, and her granddaughter’s clothes. Mary Ann is survived by her daughter, Nancy K. Lindemood of Fort Collins, Colorado, her grandchildren, Bridget King (Steve) of Denver, Megan Chandler (Marcus) of St. Louis, Bonnie Lindemood of Wichita, Aaron Knight of St. Louis, and Katherine Knight of St. Louis, her daughter-in-law, Nancy Knight of St. Louis, and her great-grandchildren, Harlem Walker, and Harper Chandler. Mary Ann was preceded in death by her parents, and her son, Evert Scott Knight, her brother, Edward Akers and her sister, Mavis Mooney. She was also preceded by her granddaughter, Elizabeth Jo Lindemood and her great grandson, Brooklynn RayOlon Walker. A graveside service will be held on July 23, 2021, at 2:00 p.m. at Caledonia Methodist Cemetery. Pastor Jim Wills will be officiating. In lieu of flowers, memorials may be made to The Baptist Home in Ironton, Missouri.

The family of Mary Ann Knight created this Life Tributes page to make it easy to share your memories.

Send flowers to the Knight family.