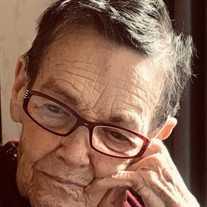 Martha Belle Brewer of Ironton, Missouri passed away December 19, 2020 in St. Louis, Missouri at the age of 92 years. She was born September 26, 1928 in Munger, Missouri the daughter of the late Milbourne Orestes and Edna Ruth (Hatridge) Pinkley. As an only child, her formative years around East Fork of Black River extending toward Imboden, “Rich Hill”, and Cedar Grove were incredibly special to her. She was surrounded by loving parents, aunts and uncles, and many sibling-like cousins who became life-long friends. On May 27, 1951 she was united in marriage to Earl Hueston Brewer who preceded her in death on October 31, 1983. To this union two children were born: Jeri Lynn Murren and husband, Todd of Springfield, Missouri and Gregory Brent Brewer of St. Louis, Missouri. Martha Belle is also survived by two grandchildren: Erica Taylor Scoggin and husband, Alex of Holt, Missouri and Bryan Jennings Murren of Austin, Texas as well as other nieces, nephews, cousins, and relatives. Martha Belle was a 1946 graduate of Lesterville High School. In 1959 she completed a Bachelor of Science Degree in Elementary Education and an Adult Education Certification from Southeast Missouri State University. She went on to earn a Master’s Degree in Language Arts with specialization in reading from the University of Missouri – Columbia in 1965. Her teaching career began in 1951 at Sawyers School, a classic one-room schoolhouse just down the road from where she was born. She taught in various rural schools in Reynolds and Iron counties, as well as neighboring communities, through 1956. From there she spent the majority of her teaching career in the Arcadia Valley School District as an English teacher and then as a Reading Specialist through 1981. She guided many adults in getting their General Education Development certificate, including inmates at the Farmington Correctional Center. She retired from the Central School District in Park Hills, Missouri in 1988. She particularly enjoyed further studies in Guidance and Counseling including a summer at New Orleans Baptist Theological Seminary, as well as private tutoring. It’s no surprise that Martha Belle came from multiple generations of educators! Martha Belle was a very dedicated and active member of the First Baptist Church of Pilot Knob since 1952. She gave of herself constantly in teaching, sharing in fellowship, and guiding the direction and constancy of the church and its message. She was a member of Kiwanis, Delta Kappa Gamma, the Iron County Historical Society, Horizons Club, Master Gardeners, and served on the board of Iron County Economic Partnership for the economic restoration of the area after the 2005 breech of the Taum Sauk Reservoir. As a business-minded lady, she owned and operated several rental properties in the Arcadia Valley. She especially enjoyed her tenants and workers, developing long-lasting and impactful relationships with them. She established the Arcadia Valley Arts studio in one of her properties as she encouraged creative learning and appreciation of the arts. While her greatest loves were her family, church, and students of all ages, she enjoyed fabrics and sewing, genealogy, planting and beautifying her home, traveling, and journaling. She simply enjoyed encouraging people and discovering what each new day had in store. Her engaging signature smile is missed. Memorials may be made to the Pinkley-Brewer Scholarship fund. Online condolences may be made to the family at www.brysonfuneralhome.com.

Martha Belle Brewer of Ironton, Missouri passed away December 19, 2020 in St. Louis, Missouri at the age of 92 years. She was born September 26, 1928 in Munger, Missouri the daughter of the late Milbourne Orestes and Edna Ruth (Hatridge) Pinkley.... View Obituary & Service Information

The family of Martha Belle Brewer created this Life Tributes page to make it easy to share your memories.

Send flowers to the Brewer family.