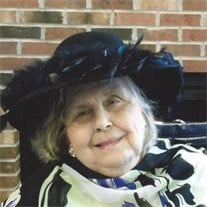 Margaret June Elser formerly of Arcadia, Missouri, passed away on October 28, 2016 in Farmington, Missouri at the age of 83 years. She was born June 22, 1933 in Arcadia, Missouri the daughter of the late Charles Lewis and Eulia Ellen (Whited)... View Obituary & Service Information

The family of Margaret June Elser created this Life Tributes page to make it easy to share your memories.

Send flowers to the Elser family.