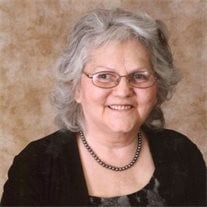 Loraine "Maxine" Ridlon, formerly of Ironton, Missouri passed away May 7, 2018 in Park Hills, Missouri at the age of 78 years. She was born September 27, 1939 in Banner, Missouri the daughter of the late Harold and Essie (Gaston) Crocker. On... View Obituary & Service Information

The family of Loraine "Maxine" Ridlon created this Life Tributes page to make it easy to share your memories.

Send flowers to the Ridlon family.