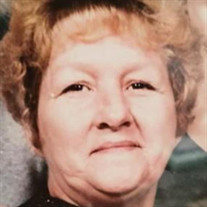 Linda Belle (Harbison) Gamble of Pilot Knob, Missouri passed away on October 4, 2021, at the age of 66 years. She was born on April 28, 1955, in Goodland, Missouri to the late Elvie and Minnie (Litton) Harbison. On October 4, 1986, she was united in marriage to Larry Gamble who preceded her in death on February 19, 1999. Linda was the mother of three daughters: Stephanie St. Clair of Pilot Knob, Missouri; Kathryn St. Clair of Potosi, Missouri and Linda Christine Moore who preceded her in death. Linda is also survived by her brothers: Lloyd (Reba) Harbison of Ironton, Missouri; Carl (Lenora) Harbison of Ironton, Missouri; Gale (Susan) Harbison of Belleview, Missouri; Chris (Pam) Harbison of Ironton, Missouri; and Tony (Jan) Harbison of Ironton, Missouri, two sisters: Vicki (Jesse) Chamberlain of Arcadia, Missouri; and Tammie Crawford of Wappapello, Missouri; eight grandchildren, six great-grandchildren, as well as host of nieces, nephews, other relatives, and many friends. Linda was preceded in death by her brother, Eugene Harbison; two sisters: Joyce Browers and Brenda Helms and her brothers-in-law: Donnie Crawford, and Roger Helms. Linda was a member of the Arcadia Valley Assembly of God Church. She was a Certified Medical Technician and worked for several nursing homes. She enjoyed cooking and being with her family. Graveside services will be held on October 14, 2021, at 11:00 a.m. at Ottery Cemetery with Pastor Adam Logan officiating. Memorials may be made to the Arcadia Valley Food Pantry.

The family of Linda Belle Harbison Gamble created this Life Tributes page to make it easy to share your memories.