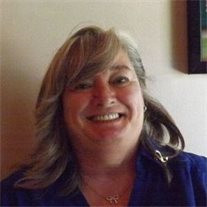 Kimberly Sue Jarvis was born in St. Louis, Missouri on December 30, 1960. She departed this life at age 55 on October 6, 2016 at her home in Bismarck, Missouri with a host of family by her side. Kimberly was the daughter of the late Ralph Miner and Ruby (Goggin) Miner who survives and resides in Belleview. She is also survived by her sister, Cheryl Carpenter of Belleview, her partner of thirty-six years, Randy D. Dillon Sr. of Bismarck, Missouri, two sons, Randy Dillon Jr. and wife, Tina of Farmington, Missouri and Ricky Dillon and wife R'nee of Tennessee. Kim was the grandmother of nine and two great grandchildren. Kimberly was preceded in death by her brother, Daryl Miner, her brother-in-law, Dennis Carpenter, and one grandson, C.J. Dillon. Kim was an aunt to Shannon Coleman and wife Carla of St. Charles, Missouri and Deni Carpenter of Belleview, Missouri and one great niece Megan Coleman. Kimberly joined the church and was baptized at Overland Weslyn Methodist Church in Overland, Missouri. Kim had many talents and particularly liked to sew and crochet. She was a beauty operator and also worked as a nurses' aide. She worked at Hoffman Tools in O'Fallon. She ended her working life at the West County YMCA working as Maintanence Supervisor. Kim served as the Secretary of Ottery Cemetery for six years. She was a true fan of Nascar's #24 Jeff Gordan and she loved to watch The Young and the Restless. She enjoyed spending time with her family, grandchildren, and friends and she loved her cats. Kim leaves behind a host of family and friends. She will be missed by many. Funeral services were held on Monday, October 10, 2016 at 11:00 a.m. from Bryson Funeral Home Chapel with Rev. Matt Prihoda officiating. Visitation was on Sunday evening from 5 – 8 p.m. Interment was in Ottery Cemetery. Memorials may be made to assist with funeral expenses. Online condolences may be made to the family at www.brysonfuneralhome.com

Kimberly Sue Jarvis was born in St. Louis, Missouri on December 30, 1960. She departed this life at age 55 on October 6, 2016 at her home in Bismarck, Missouri with a host of family by her side. Kimberly was the daughter of the late Ralph Miner... View Obituary & Service Information

The family of Kimberly Sue Jarvis created this Life Tributes page to make it easy to share your memories.

Send flowers to the Jarvis family.