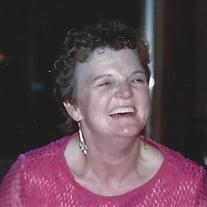 Julia Wiseman Keenan Chapman of Festus, Missouri passed away January 15, 2020 in Festus, Missouri at the age of 79 years. She was born January 4, 1941 in York, Pennsylvania the daughter of the late William and Ruth Piffier Wiseman. In 1991... View Obituary & Service Information

The family of Julia (Wiseman) Chapman created this Life Tributes page to make it easy to share your memories.

Customized sympathy cards. Mailed for you.