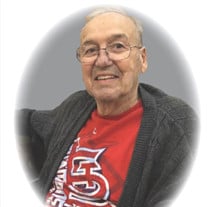 Joseph Henry Barker, formerly of Arcadia, Missouri passed away June 20, 2021, in Farmington, Missouri at the age of 79 years. He was born September 29, 1941, in Chicago, Illinois the son of the late Leslie and Marion (Borsch) Barker. On August 1, 1969, he was united in marriage to Beth Irene Bergman who survives. In addition to his wife, Joe is survived by eight daughters: Sharon Holst of Bonne Terre, Missouri, Glenna “Dianne” Crocker of Potosi, Missouri, Kathryn Crocker of Wentzville, Missouri, Michelle Womble (Jim) of Melbourne, Florida, Tracy Malan (Tim) of Overland, Missouri, Kim Phegley (Eric Dodel) of Sunset Hills, Missouri, Karolyn Campbell of Bonne Terre, Missouri, and Kelly Michinski (Edward) of Forty Fort, Pennsylvania. Also surviving are his sister; Jane Rowe of New York, sister-in-law; Dee Barker of Chicago, Illinois, fourteen grandchildren, ten great grandchildren, and eleven nieces and nephews as well as a host of other relatives and friends. Joe was preceded in death by his sister; Diane Kachold, two brothers; Rick Barker and John Barker, his son-in-law; Ken Crocker, and one grandchild; Michael Baker. Joe was a licensed pilot before he was a licensed driver. He was a second generation aviator who worked as a commercial airline pilot for over forty years. A commercial pilot who must have hauled well over a million passengers in his time with Ozark, TWA, and American Airlines, he was much more than that. A forever tinkerer, he played guitar, wrote a book, owned a drag raceway, raised and showed horses, and was the owner of several patents. He was a HAMM radio operator (WB0TTS). He could fix anything under the sun. He taught himself how to refurbish a player piano and a Model T Ford. He told stories, that, even if you had heard them before, were always compelling. Joe was active in the Terre du Lac Community and Country Club. He volunteered at Shenandoah Boys Ranch and for Wings of Hope. Above all Joe was a devoted husband and father. He loved his wife, Beth, more than anything and was so very proud of his daughters and their families. In Lieu of flowers memorials may be made to the Alzheimer's Association at www.alz.org Funeral services will be held on Saturday, June 26, 2021 at 10:00 a.m. from Bryson Funeral Home Chapel with Rev. Calvin Jones officiating. Visitation will be on Friday evening from 4:00 p.m. until 7:00 p.m. Interment will be in North Lawn Memorial Park outside of Salem, Missouri. Online condolences may be made to the family at www.brysonfuneralhome.com.

Joseph Henry Barker, formerly of Arcadia, Missouri passed away June 20, 2021, in Farmington, Missouri at the age of 79 years. He was born September 29, 1941, in Chicago, Illinois the son of the late Leslie and Marion (Borsch) Barker. On August... View Obituary & Service Information

The family of Joseph Henry Barker created this Life Tributes page to make it easy to share your memories.

Send flowers to the Barker family.