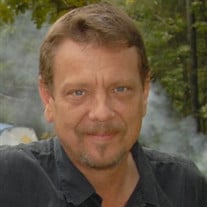 John Walter Pruitt of St Louis, Missouri passed away July 31, 2019 in Annapolis Missouri. He was born November 29, 1963 in St. Louis, Missouri the son of the late Walter Lee and Esther Alberta (Tipp) Pruitt. He is survived by his wife, Nancy Lynn Pruitt and two sisters LeeAnn Pruitt of St Louis, Missouri and Wallis “Kay” Summers of Kansas City, Missouri, his niece, Stephanie Mayer and her husband, David, his nephew, Stephen Summers and his wife, Vanessa, great nephews, Garrett and Sutton and great niece, Sophia as well as a host of other relatives and countless friends. John's formal education was a bachelor's degree in housing design from the University of Missouri in Columbia and a master’s of architecture from Washington University in St Louis. He taught housing design at the University of Missouri and later at Southeast Missouri State in Cape Girardeau. As John's love and fascination of Digital Arts grew, he transitioned into both website design and eventually marketing design work. He particularly enjoyed working with the Crawford County Electric co-op, designing three large murals, posters and mailers for their clientele. His work garnered them two national awards and some of it was later adapted for use by various other coops throughout the country. John particularly loved photography and enjoyed the digital manipulation to create an entirely different piece of art. John was never without a sketchpad and a box of pencils and markers, engaging participation from others in a collaborative art process called “Exquisite Corpse.” He hosted numerous figure drawing clubs. His love of illustration started in high school when he worked summers at Six Flags drawing the amusing caricatures of people. John’s true love was the Pruitt farm, spending many years with family and friends. His favorite toy was his bulldozer. He also loved hunting with his dad and “the girls,” the many English setters over the years, especially on those trips to South Dakota that became father son trips more so than hunting. At the farm, he would laugh at the girls when they would take a swim in the pond, pause as if on point, then dunk their heads in the water and pull out a big fish. To further explore John’s gift to us, please visit johnpruittcreative.com. Celebration of life services will be held on Tuesday, August 6, 2019 at 1:30 p.m. from Bryson Funeral Home in Pilot Knob. Visitation will begin at 11:30 a.m., followed by a service at 1:30. Interment will be in the Knights of Pythias Cemetery in Ironton, Missouri. In lieu of flowers, contributions may be made to Building Futures (http://building-futures.org), Artica (http://articastl.com or Knights of Pythias Cemetery, 792 County Road 101, Ironton, MO 63650.

John Walter Pruitt of St Louis, Missouri passed away July 31, 2019 in Annapolis Missouri. He was born November 29, 1963 in St. Louis, Missouri the son of the late Walter Lee and Esther Alberta (Tipp) Pruitt. He is survived by his wife, Nancy... View Obituary & Service Information

The family of John Walter Pruitt created this Life Tributes page to make it easy to share your memories.

Send flowers to the Pruitt family.