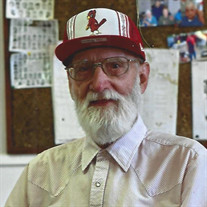 John Roger Moore of Belleview, Missouri passed away on September 16, 2021, at the age of 92 years. He was born in Ironton, Missouri on July 27, 1929, to the late Samuel and Lena (Vineyard) Moore. In 1948 - 1997, John was united in marriage to the late Mary Louise Reed. From this union, two children were born who survive: Judith Ann Neff of Belleview, Missouri and Brenda Sue Thomlinson of Park Hills, Missouri. John is also survived by his brother, Leonard Robert Moore of Kaolin, Missouri; a sister, Nora Mae Douglas of Farmington, Missouri; 4 grandchildren: Eric Neff (Susan), Crystal Mink (Jason), Carrie Dunn (John), Cassie Freeman (Glenn), 9 great-grandchildren, 2 great great-grandchildren, and one great great-grandchild on the way. John later married the late Lillian Allie Nash from 1998 – 2008. They were blessed with four daughters who survive: Sharon Inglish of Union, Missouri; Rose Minear (Dennis) of Fredericktown, Missouri; Karen Krawzik (Gary) of Fredericktown, Missouri; Linda Inglish of Fredericktown, Missouri; 8 grandchildren, 15 great-grandchildren, 5 great great-grandchildren; as well as a host of nieces, nephew, other relatives, and many friends. John proudly served our country in The United States Army from 1948 – 1954, serving during the Korean Conflict. Where he worked as a jeep mechanic. He was an auto mechanic, working on advanced engines and a combination welder. Upon returning from the service, he was employed as a flooring grader for Ozark Oak Flooring Company in Bismarck, Missouri. Later, he was employed as a miner for the Pilot Knob Pellet Mines. John was an avid St. Louis Cardinal fan, he enjoyed playing the guitar, coin collecting, and his small engine repair for his Belleview neighbors. Services will be held at on Friday, September 24, 2021, at 11:00 A.M. from Bryson Funeral Home Chapel with Pastor Scott Jones officiating. Visitation will be held on Thursday evening, September 23, 2021, from 5:00 P.M. to 8:00 P.M. Interment will be at Arcadia Valley Memorial Park. Memorials may be made to St.Labre Indian School. Online condolences may be made to the family at www.brysonfuneral home.com. Out of respect for the elderly and frail, the family requests masks be worn and social distancing be practiced at all times. Thank you for your cooperation and understanding.

The family of John Roger Moore created this Life Tributes page to make it easy to share your memories.

John Roger Moore of Belleview, Missouri passed away on September...

Send flowers to the Moore family.