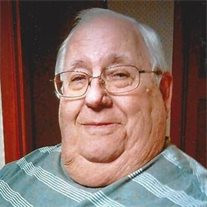 John Komar of Ironton, Missouri passed away April 4, 2017 in St. Louis, Missouri at the age of 85 years. He was born January 17, 1932 in Desloge, Missouri the son of the late Andrew and Anna (Pasternak) Komar. On June 21, 1952 he was united in marriage to Jacqueline Thurman who survives. To this union three children were born; Carole Gore and husband, Larry of Pilot Knob, Missouri, Gary Komar of Pilot Knob, Missouri, and James Komar and wife Dawn of Farmington, Missouri. In addition to his children John is survived by five grandchildren; John Sellers and wife, Sara, Wendy Tyndall and husband, Nick, Kelly Besemer, Nathan Komar, and Clayton Komar, four great grandchildren; Sidney, Jesse, Blake, and Logan, his sister Katherine White and husband Tom of Chillicothe, Ohio, his brother, Andrew Komar and wife Jeannie of Moberly, Missouri and his sister-in-law, Nancy Komar of Ironton, as well as a host of nieces, nephews, other relatives and many many friends. John was preceded in death by his brother, Mike Komar. John was a graduate of Desloge High School. He served his country in the United States Army during the Korean Conflict. He was stationed in Japan. He was the owner of the local IGA store for twenty-eight years. John served on the Arcadia Valley School District Board for twenty-two years and the First State Community Bank Board for twenty-nine years. He was an avid baseball and basketball fan. He loved hunting, fishing, working in the garden and playing cards.

The family of John Komar created this Life Tributes page to make it easy to share your memories.

Send flowers to the Komar family.