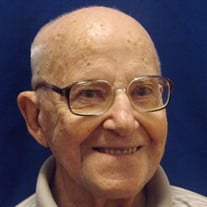 John Harrison Burney was born on January 20, 1913, in Line, Arkansas, to Eli Taylor Burney and Emma Caroline Garrett Burney. He was the third son of a country doctor in a sawmill town. After completing high school, he took the state teachers’ exam, and worked as a bus driver for a dollar a day, teaching algebra and geometry for free (since he was going to be at the school anyway). When that school closed (many public schools closed during the Depression), he opened a contract school ($3 per month per student) for a year. Then he worked his way through Chillicothe Business School, graduating in 1935. In 1936, he accepted a job as secretary and bookkeeper at the Baptist Home in Ironton, MO. On his first day at the Home he met a nurse’s aide to whom he was quite attracted. On July 23, 1937, he and Gladys Phillips secretly eloped. Gladys was a powerful, loving, and faithful companion for the next 73 years. They had three children: Ruth Ann; Jeanette Elaine, who is married to George Ashley; and John Taylor, who is married to Susan Wolfe Burney. In 1953 he was elected the Superintendent of the Baptist Home. At that time the Home had a staff of 15 and 65 residents. When he retired in 1975, the Home had 185 residents and a staff of 62. After retirement, he and Gladys volunteered at the Home for an additional 28 years, stopping only when he was told that if an accident happened while he was driving residents to hospitals, the Home would have difficulty explaining why a 90-year-old man was driving “old people” to medical facilities. At the age of 100 his eye doctor removed his restrictions for night and highway driving, but he asked to keep them because, he said, “everyone would be asking me for rides.” While in Ironton, John served as the chair of the deacons at the First Baptist Church, as financial secretary, as the head of pulpit committees, as the chair of the building committees, and (most importantly) a devout follower of Christ. John died on September 23, 2018 at the age (as he liked to put it) of 105 years, 8 months, and 3 days. John was preceded in death by his parents, his brothers and sister, his wife, and his daughter, Ruth Ann. He is survived by his children, Jeanette and JT, four grandchildren, nine great grandchildren, and more friends than even he knew.

John Harrison Burney was born on January 20, 1913, in Line, Arkansas, to Eli Taylor Burney and Emma Caroline Garrett Burney. He was the third son of a country doctor in a sawmill town. After completing high school, he took the state teachers&#8217;... View Obituary & Service Information

The family of John Harrison Burney created this Life Tributes page to make it easy to share your memories.

Send flowers to the Burney family.