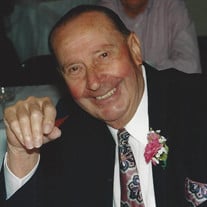 Jeffery Junior Browers of Ironton, Missouri passed away October 20, 2019 at Stockoff Nursing Home in Fredericktown, Missouri at the age of 92 years. He was born October 21, 1926 in Ironton, Missouri the son of the late Irvin and Janie (Metcalf) Browers. On March 27, 1948 he was united in marriage to Mary Ellen Clark who preceded him in death on March 28, 1980. To this union three children were born; Mary Jane Savage (Bob) of Ironton, Missouri, Wayne Browers (Linda) who preceded him in death, and Steve Browers (Kathy) of Ironton, Missouri. Jeff is also survived by four grandchildren; Robert Savage and wife, Paige, Jason L. Savage and fiancé, Susan, Chad Browers and fiancé, Phyllis, and Candice Mary Turner and husband, John; five great grandchildren; Allison, Madison, Caysee-Lin, Wyatt, and Macey, two step great grandchildren; Susan and Christopher, and two great great grandchildren; Lylah and Oaklen as well as a host of nieces, nephews, other relatives and friends. Jeff was preceded in death by three brothers; Harvey Browers, Leroy Browers, and Irvin Browers, two sisters; Elizabeth Wetton and Beulah Inman, and a grandson, Jeffie Browers. Jeff proudly served his country in the United States Army during WWII. He was a member of the Arcadia Valley Assembly of God. He was a life-time member of the Bismarck V.F.W. Post. He enjoyed the activities at Stockoff Nursing Home and had many friends there. He especially enjoyed playing cards and bingo and was a frequent winner. Jeff was witty and had a great sense of humor. Funeral services will be held on Wednesday, October 23, 2019 at 11:00 a.m. from Bryson Funeral Home Chapel with Brother Clyde Bess officiating. Visitation will be on Tuesday evening from 5 – 8 p.m. Memorials may be made to Stockoff Nursing Home Activities Department. Online condolences may be made to the family at www.brysonfuneralhome.com.

Jeffery Junior Browers of Ironton, Missouri passed away October 20, 2019 at Stockoff Nursing Home in Fredericktown, Missouri at the age of 92 years. He was born October 21, 1926 in Ironton, Missouri the son of the late Irvin and Janie (Metcalf)... View Obituary & Service Information

The family of Jeffery Junior Browers created this Life Tributes page to make it easy to share your memories.