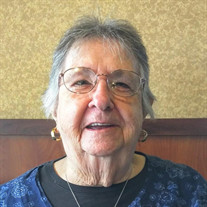 Janet Darlene Browers of Ironton, Missouri, passed away on March 10, 2021 at the age of 82 years. She was born on January 12, 1939 in Lincoln, Nebraska, the daughter of the late Walter and Vera (Hildie) Reeves. On May 22, 1952 she was united in marriage to John Louis “Pinie” Browers who preceded her in death on September 3, 2008. To this union eight children were born: John Browers Jr. of North Platte, Nebraska; Ira Browers of Ironton, Missouri; Lou Ann Carter and husband, Gerald of Santa Fe, Texas; Buddy and wife, Gayle Browers of Ironton, Missouri; David Browers of Ironton, Missouri; Terry “Todd” Browers and wife, Pat of Pine Mountain, Georgia; and Michael Browers of Ironton, Missouri. Janet is also survived by three brothers: Ronnie Gleason of Kearny Nebraska; Larry Gleason of LaVista, Nebraska, Jimmy Gleason of Kearney, Nebraska and one sister; Shirley Wells of Nebraska; fourteen grandchildren, twenty-four great grandchildren, and one great great grandson as well as a host of nieces, nephews, other relatives, and many friends. In addition to her parents, Janet was preceded in death by her daughter; Mary Ann Browers, three brothers; Don Gleason, Dick Gleason, and Jack Gleason, her sister; Betty Gleason, two daughters-in-law; Carol Browers and Diamond Browers, two grandchildren and two great grandchildren. Darlene was a familiar face to locals when she worked at the Kozy Korner Café, Grant’s Inn, and The Baptist Home. She also worked for Brown Shoe Company. She enjoyed fishing, camping, cooking, singing, reading, and her “soapies”. Most of all she loved life itself and her biggest joy was time with her family. Due to COVID-19, all family members and guests are required to wear a mask or facial covering while visiting our facility. Social distancing is also expected to keep family members and staff safe. Seating capacity has been reduced to accommodate social distancing. Thank you for your cooperation and understanding.

Janet Darlene Browers of Ironton, Missouri, passed away on March 10, 2021 at the age of 82 years. She was born on January 12, 1939 in Lincoln, Nebraska, the daughter of the late Walter and Vera (Hildie) Reeves. On May 22, 1952 she was united... View Obituary & Service Information

The family of Janet Darlene Browers created this Life Tributes page to make it easy to share your memories.

Janet Darlene Browers of Ironton, Missouri, passed away on March...