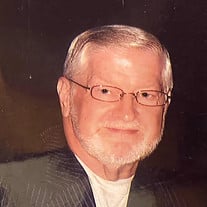 James Newton Barnes, known to many as “Newt” passed away March 18, 2022 at his home at the age of 79 years. He was born April 26, 1942 in Pacific, Missouri the son of the late William Charles and Ivah Delaleh (Short) Barnes. Newt is survived by his wife, Brandy E. Duncan-Barnes of Ironton, Missouri, his two sons: Phillip “Todd” Barnes and wife, Melissa of Marietta, California and Charles “Heath” Barnes and wife, Janet of St. Charles, Missouri. Three sisters survive: Vicki Barnes of Pacific, Missouri, Charlotte Lewis (Walt) of Ballwin, Missouri, and Terry Warnecker (Don) also of Ballwin, Missouri, as well as a host of grandchildren, great grandchildren, nieces, nephews, other relatives, and friends. In addition to his parents, Newt was preceded in death by his siblings Eileen, Bud, Russell, Mildred, Betty, Jeanette, and Bill. Newt was a 1960 graduate of Ironton High School. He served his country in the United States Army. He worked for Proctor and Gamble for many years before his retirement. Newt enjoyed playing golf and was a former member of the Arcadia Valley Country Club. Funeral services were private and under the direction of Bryson Funeral Home. Interment was in Arcadia Valley Memorial Park. Memorials may be made to The Arcadia Valley Country Club, PO Box 43, Ironton, MO 63650.

The family of James Newton Barnes created this Life Tributes page to make it easy to share your memories.

James Newton Barnes, known to many as “Newt” passed away March...

Send flowers to the Barnes family.