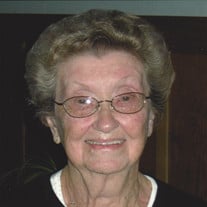 Inez Berneice Pierson of Owassa, Oklahoma passed away January 11, 2019 at the age of 94 years. She was born September 14, 1924 in Annapolis, Missouri the daughter of the late Acie and Lena Bell (Joines) Pennington. On October 20, 1944 she was united in marriage to Norman Pierson who preceded her in death on May 21, 1999. To this union two children were born; Rita Thornton of Owasso, Oklahoma and Gary Pierson and wife, Susan Roth of Auburn, Washington. Inez is also survived by two grandchildren; Scott Thornton and wife, Kathy of Owasso, Oklahoma and Tiffany Thornton of Durant, Oklahoma, two step granddaughters; Greta Roth of Issaqua, Washington, and Andria Roth of Seattle, Washington, four great grandchildren; Skylar Stinnett of Houston, Texas, Natalie Thornton of Owasso, Oklahoma, Marshall Hatch of Durant, Oklahoma, and Peyton Roth-Miller of Issaqua, Washington, two brothers; C. Berlin Pennington of Cape Girardeau, Missouri, and Aurlin Pennington of Vulcan, Missouri, as well as a host of nieces, nephews, other relatives and friends. In addition to her parents and husband, Inez was also preceded in death by three sisters; Lillian “Maxine” Collier, Eunice Marie Pennington, and Carma Eileen Rothweiler. Her brother, Harold Pennington passed away January 14, 2019, just three days after his sister. Inez was a 1942 graduate of Annapolis High School. She worked as a finisher for Rexall Drug. She was a proud, hard working woman. She was funny and loved by everyone who ever met her. She was beautiful inside and out. She will be missed everyday forever by those left behind. Funeral services will be held on Wednesday, January 16, 2019 at 1:00 p.m. from Bryson Funeral Home with Rev. Gerald Collier officiating. Visitation will begin at 11:00 a.m. Interment will be in Mann Cemetery. Memorials may be made to the Alzheimer’s Association. Online condolences may be made to the family at www.brysonfuneralhome.com.

Inez Berneice Pierson of Owassa, Oklahoma passed away January 11, 2019 at the age of 94 years. She was born September 14, 1924 in Annapolis, Missouri the daughter of the late Acie and Lena Bell (Joines) Pennington. On October 20, 1944 she was... View Obituary & Service Information

The family of Inez Berneice Pierson created this Life Tributes page to make it easy to share your memories.

Send flowers to the Pierson family.