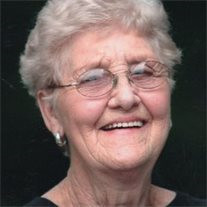 Ina Maxine Reitzel was born Feb 23, 1921 at West Fork MO to Oather Ernest and Olive Gertrude Shults Sutterfield. She departed this life on Nov 14, 2012 while residing at the Baptist Home in Ironton Mo. Maxine was the fourth of nine children born to her parents. She lived with her siblings and their parents on the family farm in Reynolds County. She attended Bills Creek one-room grammar school and Bunker High School. In 1938 she met George Reitzel while he was in the Civilian Conservation Corps working in Reynolds County. They were married June 3, 1939. Shortly thereafter, she moved to St Louis with her husband. She and George had two daughters, Brenda and Joyce. In addition to being a mother and homemaker, Maxine worked outside the home, as a retail salesperson at Famous Barr for over 30 years. She loved clothes and wore them with style, so she enjoyed selling dresses and home fashions at the May Co. Maxine and her husband always enjoyed spending time at their summer cabin down on Marble Creek. Maxine is survived by her brother Bernie Sutterfield and wife Kris of Bellefontaine OH; sisters-in-law Mary Jane Sutterfield of Salem MO, Diana Sutterfield of Richmond VA, Mary Freeman of Sullivan MO and Dorothea Reynolds of Englewood FL; brother-in-law Richard Prugh of Salem MO; daughters Brenda Sneed of St Louis and Joyce Chronister and husband Vernon of West Plains MO; grandchildren Jennifer Kunz and husband Erik, John Sneed and wife Sharon, Rebekah Sneed, and Charles Sneed and wife Becke, all of St Louis, and Richard Chronister and wife Regena of West Plains MO and Andrew Chronister and wife Kim of Cape Girardeau MO. She is also survived by great grandchildren Nicole and Mitchell Sneed and Kari Kunz of St Louis, Tyler Chronister of West Plains and Caitlin Kissinger and husband David of Columbia MO, as well as many nieces and nephews. She was preceded in death by her parents, her beloved husband George, brothers Edward, Ralph and Lyndle Sutterfield, and sisters Mabel Dominick, Hazel Sutton, Freeda Polk and Norma Prugh.

Ina Maxine Reitzel was born Feb 23, 1921 at West Fork MO to Oather Ernest and Olive Gertrude Shults Sutterfield. She departed this life on Nov 14, 2012 while residing at the Baptist Home in Ironton Mo. Maxine was the fourth of nine children... View Obituary & Service Information

The family of Ina Maxine Reitzel created this Life Tributes page to make it easy to share your memories.

Send flowers to the Reitzel family.