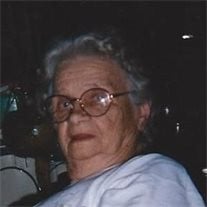 Helen P. Jaycox, formerly of Belleview, MO passed away June 22, 2013 in Osage Beach, MO at the age of 95 years. She was born July 20, 1917 in Bismarck, MO the daughter of George and Irene (Hinds) Racer. On August 16, 1933 she was united in marriage to Loyd G. Jaycox who preceded her in death on July 30, 1986. To this union eleven children were born; Peggy Putnam of Osage Beach, MO, Linda Garrett of Columbia, MO, Gary Jaycox of Kaiser, MO, Jerry Jaycox of High Ridge, MO, and Deborah Cooper of Butler, MO. She was preceded in death by six of her children; Mary Wucher, Clyde Jaycox, Loyd L. Jaycox, Shirley Neighbors, Sarah Wells, and Darrell Jaycox. Helen was also preceded in death by her brother, Paul Racer, half-brothers; Lonnie Stricklan, Francis Stricklan, and half sister, Mildred Rowe. Helen is survived by 30 grandchildren, 54 great grandchildren, and 38 great great grandchildren, as well as a host of nieces, nephews, other relatives and many friends. In addition to being a full time mother, Helen owned and operated a sawmill with her husband, Loyd.

The family of Helen P. Jaycox created this Life Tributes page to make it easy to share your memories.

Send flowers to the Jaycox family.