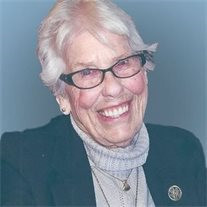 Gladine Louise Stark of Arcadia, Missouri passed away July 15, 2017 at the age of 97 years. She was born July 11, 1920 in Sabula, Missouri the daughter of the late John Robert and Minnie Raymoth (Huff) Lewis. On June 6, 1942 she was united in marriage to Arthur "Corky" Stark who preceded her in death on January 25, 2010. To this union two children were born; Arthur L. Stark and wife, Margaret of Roselle, Missouri and Patsy Smith of Arcadia Missouri. In addition to her children, Gladine is survived by two sisters; Tenna Bell (Clinton) Crocker of Ironton, Missouri and Imogene Allmon of Springfield, Missouri, five grandchildren; David Stark and wife Anitra of Ironton, Tim Stark of Ironton, Jennifer Cain and husband, David stationed at Fort Bliss, Texas, Kelly Silvy and husband Michael of Arcadia, Pam Cissell Aman and husband, Rod of St. Charles, six great grandchildren; Alex Stark, Logan, Dalton, and Darien Cain, Noah, Elijah, and Josiah Silvy. Gladine was preceded in death by her husband of 67 years, Corky Stark, her brother, Marvin Lon Lewis and five sisters; Edna Lewis, Patsy Lou (Harold) Scaggs, Lucille (Orville) Dennison, Ruth Botkins Greenhill and Pauline (David) Meadows. Gladine was a 1938 graduate of Annapolis High School. She became a member of the Arcadia Valley United Methodist Church in 1950 and she participated in the Albright Sunday School Class. In 1953, she started the Dairy Cream on Main Street in Ironton. The following year she and Corky purchased a Dairy Queen franchise which they owned and operated in Arcadia for twenty-one years. In 1952 she began her long and fulfilling journey in the Order of the Eastern Star that took her to become the Worthy Grand Matron for the State of Missouri in 1969. She also served as the Grand Treasurer as well as on various other committees for the O.E.S. She and Corky belonged to the Do-Si-Do's square dance club. In 1975 she owned a dress shop, Pat's Fashionland along with her daughter, Pat. Gladine loved people and she lived her life to the fullest.

Gladine Louise Stark of Arcadia, Missouri passed away July 15, 2017 at the age of 97 years. She was born July 11, 1920 in Sabula, Missouri the daughter of the late John Robert and Minnie Raymoth (Huff) Lewis. On June 6, 1942 she was united in... View Obituary & Service Information

The family of Gladine Louise Stark created this Life Tributes page to make it easy to share your memories.

Send flowers to the Stark family.