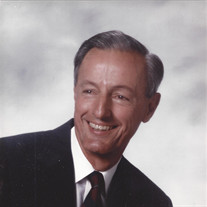 Giles Kinzer Hunt, known to his friends and family as “GK”, passed away October 15, 2018 in Ironton, Missouri at the age of 84 years. He was born November 22, 1933 in Ironton, Missouri the son of the late Giles Kinzer Hunt Sr. and Gladys (Richards) Hunt. Giles was a 1951 graduate of Ironton High School and attended the University of Missouri – Columbia, where he graduated in 1955 with a B.S. in Agriculture. In the summers he worked for the United States Forest Service in Montana. He enlisted in the United States Air Force in 1955 and was commissioned as a 2nd Lieutenant. He was stationed in Alaska, where he was a radar intercept officer and received several citations for his work. While in Alaska, he earned his private pilot’s license. He was honorably discharged as a 1st Lieutenant in 1957. After his discharge he worked in marketing and sales for Carnation in Guam, Guatemala and San Salvador and for Arneson Products where he traveled in the United States and Europe. Later he worked for Coca-Cola and Dole Foods in Central American. In addition to English, GK spoke French and Spanish. At the age of 57 he retired to live in the Kalispell, Montana area, where he enjoyed hiking, snow skiing, mountain biking and golf. On October 10, 1992, he and Juanita (Wood) Degonia were united in marriage. GK enjoyed the outdoors and hiked regularly there with the Over The Hill Gang, a group of hikers who were all at least 60 years of age and hiked regularly in the Glacier National Park. Their exploits have been chronicled in a book written by a member of the group. Skiing was his winter passion and at age 72 he skied 3.8 million vertical feet on Big Mountain, Whitefish, Montana. In 2013 he and Juanita returned to the Arcadia Valley, where he was born and raised and continued to enjoy family, friends, and golf. GK attended the Arcadia Valley United Methodist Church and was a member of the Arcadia Valley Country Club. GK is survived by his wife, Juanita (Wood) Hunt; his son, Steve and wife, Julie, two step-daughters; Pam Dolle and husband, Tony, and Susan Degonia, five grandchildren; Tyler Hunt, Brian Hunt and wife Clairissa, Sara Hunt, Dr. Aaron Dolle and wife, Julia, and Sarah Willemsen and husband, Russ; two great granddaughters, Stella Hunt and Hayden Dolle, as well as a host of other relatives and many friends. He was preceded in death by his parents, his son, Gary Hunt, and his brother, John Hunt.

The family of Giles Kinzer Hunt Jr. created this Life Tributes page to make it easy to share your memories.

Giles Kinzer Hunt, known to his friends and family as “GK”, passed...

Send flowers to the Hunt family.