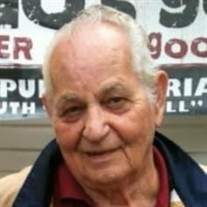 Gilbert Peter Ries of Lesterville, Missouri passed away peacefully on December 29, 2020 surrounded by his family. He was born May 23, 1930 in St. Louis, Missouri the son of the late Nicholas and Gertrude (Christmann) Ries. In addition to his parents, he was preceded in death by his wife, Kay Ries and his daughter, Kathy Ries and his brother, Robert Ries. Gil is survived by three daughters: Linda Logan (Eugene), Laurie Mayes (Ronnie), and Susan Dibb, all of Lesterville, Missouri. Six grandchildren survive: Nick (Jamie), Joe (Amy), Mike (Melissa), Megan (Travis), Justin and Steven and six great grandchildren: Lily, Blakely, Roczen, Addison, Norah, and Conlee as well as a host of other relatives and friends in the Lesterville community and the Black River Lodge community. He treasured all of his family who were the most important people in his life. Gil served his country in the United States Air Force during the Korean War. Following his service to our country, he returned home and married his wife, Mary Kay Malone. They moved to Black River Lodge in 1955 and he lived there for the rest of his life. Gil was very active in running the Black River Lodge. He called square dances and bingo and he was the engineer for the kiddie train after Casey Jones (Bill Onder) passed away. He put volleyball games together every evening, performed in the talent show, showed the Sunday night movie, and enjoyed every minute of it. Gil liked to cruise around the lodge in his golf cart. He made life-long friends with families who came down to vacation at Black River Lodge and whose families still come down every summer……5th generation now. Black River Lodge will celebrate its 75th year in the Ries family next summer and he was very proud of this heritage. His five greatest loves were music, animals, women, BRL, and his four daughters and their families whom he cherished to the very end. THE MEMORIAL GATHERING PLANNED FOR APRIL 24, 2021 HAS BEEN POSTPONED. WE WILL POST UPDATED INFORMATION WHEN IT BECOMES AVAILABLE. Online condolences may be made to the family at www.brysonfuneralhome.com.

Gilbert Peter Ries of Lesterville, Missouri passed away peacefully on December 29, 2020 surrounded by his family. He was born May 23, 1930 in St. Louis, Missouri the son of the late Nicholas and Gertrude (Christmann) Ries. In addition to his... View Obituary & Service Information

The family of GIlbert Peter Ries created this Life Tributes page to make it easy to share your memories.

Send flowers to the Ries family.