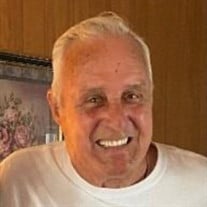 George Emmitt May of Annapolis, Missouri passed away on September 12, 2021, in Pilot Knob, Missouri at the age of 89 years. He was born on January 5, 1932, to the late Emmitt and Inez (Spradley) May. George was one of eight children, all who preceded him in death: Elma Tarvid, Reba Swaringim Botkin, Edna Kempen, Myler May, Mary June Gordon Favorite, Ray May, and Norma Blything. George attended and graduated Reynolds Corridon School. Following graduation, he entered the United States Army and served his country from 1952-1954. He served as an infantry man in the Korean War, where he was awarded the Korean Service Medal, two Bronze Service Stars, Good Conduct Medal, Combat Infantry Badge, the United Nations Service Medal, and the National Defense Service Medal. After his discharge, he returned to Reynolds, Missouri where he worked as a labor/carpenter. He went on to marry Opal Jackson of Hogan, Missouri in 1961 and to this union six children were born: Sherry (Mark) Bell of Hazelwood, Missouri; Barbie (Roger) Wright of Coalfield, Tennessee; Tracy (Sandy) May of Annapolis, Missouri; Lisa May of Hillsboro, Missouri; Mary Lou (1964) and Tory Lynn (1968) both who died at birth. George is survived by ten grandchildren, twenty-one great- grandchildren, and numerous nieces, nephews, and many friends. He was preceded in death by a great granddaughter. George worked at Chromecraft. He also worked construction, helping to construct Taum Sauk Reservoir, Highway 67, and Highway 21. He served on the Board of Corridon Reynolds Cemetery for many years, serving as President for many of those years. In 1995 he retired from Jennings School District where he was a maintenance worker. George resided in St. Louis from 1982 to 2006. He moved to Annapolis in 2017, where he attended the Annapolis Church of the Nazarene. George was an avid gardener and cook. He loved to quilt and made each child and grandchild their own quilt. He enjoyed exercising three days a week at the Farmington Senior Center for many years. A graveside service with full military honors will be held at the Annapolis Cemetery on Wednesday, September 15, 2021, at 12:00 P.M. with Reverend Howard Casteel officiating. Memorials may be made the Annapolis-Lewis Cemetery Association, PO Box 271, Annapolis, MO 63620. Online condolences can be made to the family at www.brysonfuneralhome.com.

George Emmitt May of Annapolis, Missouri passed away on September 12, 2021, in Pilot Knob, Missouri at the age of 89 years. He was born on January 5, 1932, to the late Emmitt and Inez (Spradley) May. George was one of eight children, all who... View Obituary & Service Information

The family of George Emmitt May created this Life Tributes page to make it easy to share your memories.

George Emmitt May of Annapolis, Missouri passed away on September...

Send flowers to the May family.